The Russell 2000 Index has risen too fast and too furious in the first quarter, up nearly 15% year-to-date on reflation hopes, vaccine rollouts, and stimulus.

Small Caps have historically been highly correlated with lower quality credit risk as they are – by definition – more dependent on levered debt. The last few months have seen that relationship utterly destroyed as investors appear to have chased lottery tickets… 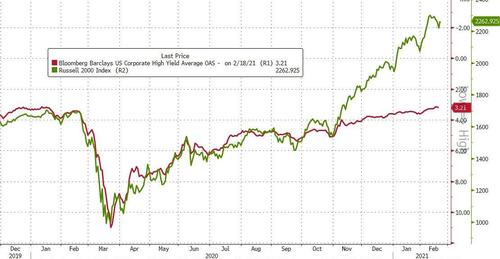 That surge has also erased all the relative underperformance relative to the Nasdaq since the March collapse. 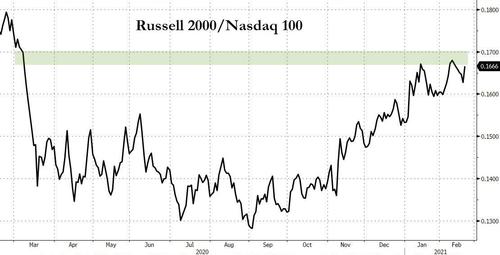 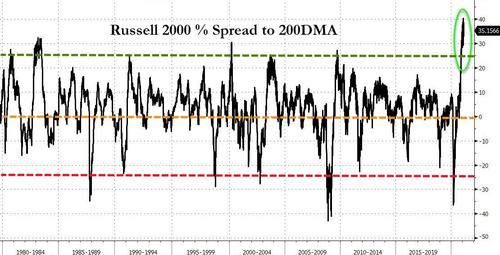 And Small Caps have never been more expensive… 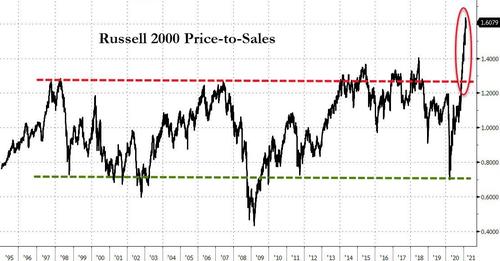 On the session, the small caps index is up over 2% to around 2264, nearing a significant resistance level of the upper bound of a decades-long ascending channel.

The Russell has held high-level support at 2256 and we look for a retest of the recent bearish “reversal day” high at 2318. Above here should clear the way for a move to 2327 next, then the top of the long-term channel from 2010 (see weekly chart above) at 2235, with the top of a further channel from the March low last year seen at 2345. We would again look for a fresh cap for now in this 2335/45 zone. Big picture though we look for the uptrend to extend in due course to 2445.

Support moves to 2264 initially, then 2256, below which should clear the way for a fall to the 38.2% retracement of the rally from late January and rising 13- day exponential average at 2224/22, with a fresh floor expected here.

Above the “reversal day” high at 2318 should see strength extend to retest the top of the twin trend channels at 2335/45.

But as we must note, the weekly Russell 2000 Index, given Sneddon’s chart art below, shows a decade’s long ascending channel where technicians may observe resistance between 2445-2500. 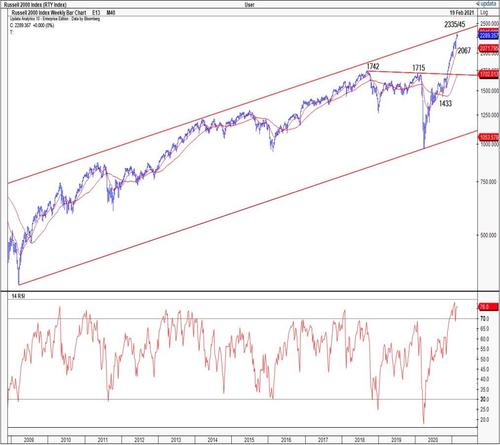 One look at relative strength index on a 14 count, and it too is at record over bought territory and may have already peaked. While the double-banded oscillator can stay in overbought territory for some time, it’s important to note that a correction could be nearing. 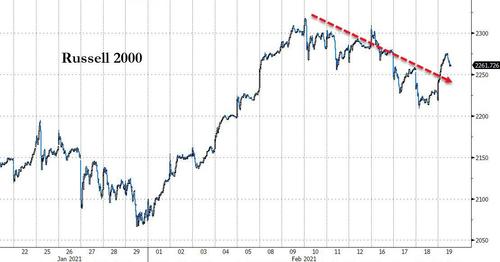 Maybe this week is the start of it?