As Model S and Model X vehicles (and even some Model 3s) age further with each day, we’re guessing there are going to be an awful lot of stories about the quality of Tesla vehicles deteriorating as they get older. That’s because, as we have noted several times (here and here), Teslas don’t exactly seem like they are top quality the day they roll off the line.

And it appears J.D. Power agrees with us – the American data analytics and consumer intelligence company placed Tesla 30th out of 33 manufacturers in its most recent Vehicle Dependability Survey.

The survey looked at 177 specific problems in 8 categories, the report says. This includes “powertrain, exterior flaws, and HVAC issues” among other issues. The 2021 study looks at the 2018 model year. Tesla was fourth from the bottom of the list, averaging 176 issues per 100 vehicles.

“The automaker is not officially ranked among other brands in the study because it doesn’t meet the ranking criteria. Unlike other manufacturers, Tesla doesn’t grant J.D. Power permission to survey its owners in 15 states where it is required. However, Tesla’s score was calculated based on a robust sample of surveys from owners in the other 35 states,” J.D. Power’s press releases read.

Back in 2020, Tesla also posted abysmal scores in the U.S. Initial Quality Study. The brand scored an abysmal 250 in 2020, placing it below literally dozens of other manufacturers, including names like Land Rover and Audi, in terms of reliability.

The U.S. Initial Quality Study has been put out annually for the last 34 years and works by asking buyers of new cars of the current model year what problems they have had within the first 90 days of owning a vehicle. The score is based on the number of problems experienced within those 90 days per 100 vehicles. 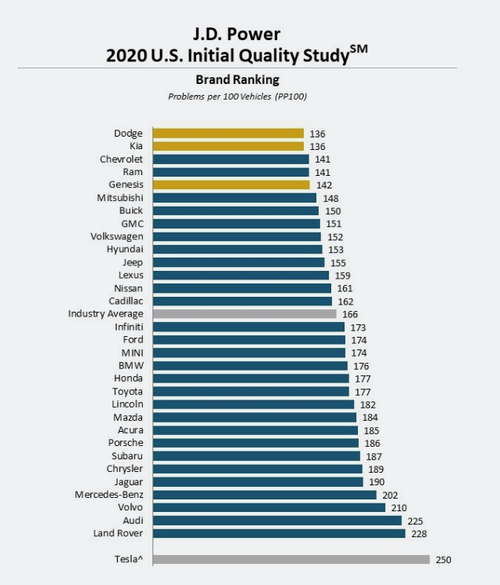 Recall, we also pointed out hours ago that Tesla was once again slashing prices internationally, marking the 13th time this year that the company has tried to stoke demand by lowering prices.

“The base price of the standard model was cut to 4.29 million yen ($40,500) from 5.11 million yen on Thursday, while the long-range version saw an even steeper drop of 1.56 million yen to 4.99 million yen. The performance sedan remained at 7.17 million yen,” according to Automotive News.

Takeshi Miyao, an analyst at consulting firm Carnorama in Tokyo, told Automotive News that the cut “should have a positive impact on sales”.

We have an idea: now that you’ve got a nearly $1 trillion market cap, why not focus on just making quality vehicles?