Off-Exchange Trading Surges To Records Thanks To Reddit Retail Rebellion

Off-Exchange Trading Surges To Records Thanks To Reddit Retail Rebellion

There have been many consequences to the Reddit retail rebellion: winners and losers in the markets, Vlad Tenev’s crisis PR budget skyrocketing and a painful house hearing on Thursday that served as 12 hours of proof that few people in Congress understand, or even seek to understand, our capital markets.

But also among those consequences is the shift that retail trading off of exchanges and into dark pools. More than 50% of trading has been done in private, off exchange, on some days recently. Some brokers who used to be at the center of the action are now finding themselves with reduced roles in the daily market chaos. Such was the case for Michael Beth, a trader profiled by Bloomberg on Thursday.

“Because that flow isn’t always accessible to most participants, it’s not necessarily adding liquidity to the overall market,” Beth said of off-exchange transactions.

The report notes that companies like Citadel Securities and Virtu Financial Inc. are at the center of the move. The deals these companies have to buy order flow from individual brokerages, such at Citadel’s highly scrutinized deal with Robinhood (which we exposed, at length, here), naturally push trades off exchanges.

Traders like Beth don’t get to interact with these trades, because they often go right from retail broker to internalizer. “Don’t hold your breath expecting those orders to hit the New York Stock Exchange, Nasdaq or some other public venue where others can respond to them,” Bloomberg writes. 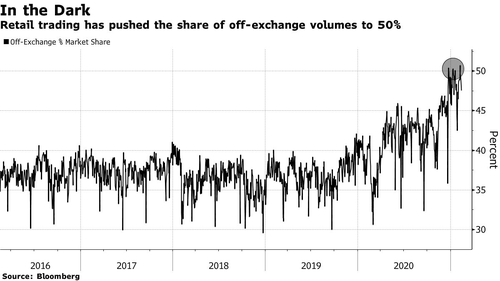 The internalizers pay retail brokerages like Robinhood and Charles Schwab for their flows while promising to fill their orders at the best prices. Citadel Securities says it provided $3 billion in what’s known as price improvement across stocks and options in 2020 by executing trades at prices that were better for the investor than those listed on public exhanges. With that source of revenue and no need to build their own trading systems, the brokerages can offer commission-free trades to customers.

When an internalizer fills a retail order, it has to do so within the National Best Bid and Offer — the highest price buyers are willing to pay and lowest price from sellers. This NBBO comes from the bids and offers on public exchanges. So while internalizers piggyback off public quotes, they don’t provide any.

Off-exchange trading used to be between 30% and 40% of U.S. trading volume, for years. Now, thanks to the Reddit retail rebellion, that number has spiked to over 50%, starting with the pandemic lockdowns (see above chart).

Justin Schack, partner at Rosenblatt Securities in New York, commented: “It’s appropriate to ask the question: Is the market still getting the prices right when there are elevated levels of off-exchange activity? If you’re selling your house, you’d want to show it to as many people as possible, not just one or two.”

Firms like Virtu push back. Steve Cavoli, global head of execution services at Virtu, said: “Trades, the culmination of price discovery, are reported to the public immediately regardless of where they occur and the algos and order routers that brokers provide to clients should incorporate those established prices in real time.”

But Jacob Rappaport, head of equities at StoneX Financial Inc, argues that internalizers just wind up making the market more volatile during times of peak demand: “They are driving that momentum in an upward direction because if they’re internalizing the flows, they’re not going to keep sitting there at the same price to sell to you. They’re going to get the market moving. Everyone I deal with, whether they’re in this business 10 months or 35 years, told me ‘I’ve never seen anything like this.’ You can throw rationale out the window.”