In the first glimpse of February economic sentiment, Markit has just released its survey data for the US services and manufacturing following rebounds in UK, EU, and Japanese data.

Despite the slump in ‘hard’ economic data (and weakness in recent labor market data), PMIs have risen to multi-year highs as hope becomes a strategy, and flash February data showed little reflection of reality with Services improving modestly (58.9 vs 58.3 prior, and 58.0 exp) and Manufacturing very modestly lower (58.5 vs 59.2 prior and 58.8 exp). 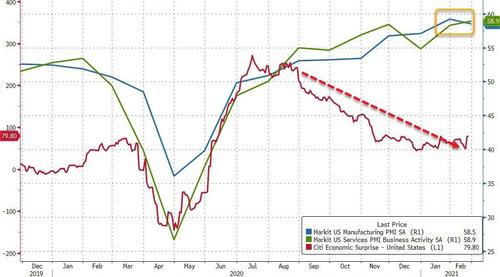 That is the highest Composite PMI since March 2015 and the US, for now, appears to be leading the world… 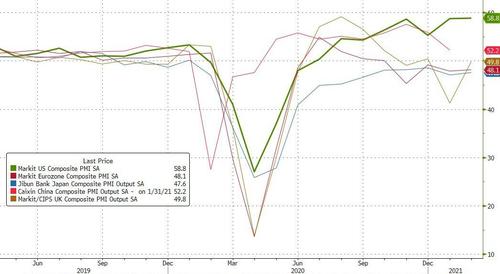 “The data add to signs that the economy is enjoying a strong opening quarter to 2021, buoyed by additional stimulus and the partial reopening of the economy as virus related restrictions were eased on average across the country. 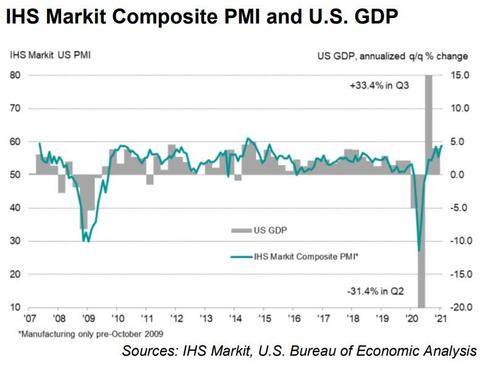 “Business sentiment remains buoyant, boosted by hopes of further stimulus and the vaccine roll out, but it’s disappointing to see this not yet translate into stronger jobs growth. Many service sector firms in particular remain reluctant to hire, cautious about adding to overheads.

“A concern is that firms costs have surged higher, driving selling prices for goods and services up at a survey record pace and hinting at a further increase in inflation.”

That last sentence is a little understating the matter.

We are sure this is all just “transitory” and Mr.Powell will brush it off as nothing…