Texas energy companies are busy restoring power on the grid after it was devastated late last week by a polar vortex split that dumped Arctic air into the state along with multiple winter storms. Even though a few hundred thousand customers remain without power on Friday morning, the risk of blackouts could continue for a couple more days to stabilize the grid.

While the power grid remains fragile, and as we told readers, the grid was minutes from uncontrollable blackouts earlier this week, Ford Motor Co. is lending a helping hand to Texans devastated in one of the worst controlled blackouts in the nation’s history.

Ford sent a memo to dealerships across the Lone Star State urging them to loan out the new F-150 trucks with an onboard generator.

“Due to the urgent and unprecedented weather situation in Texas, a number of our local dealers are using all-new Ford F-150s equipped with Pro Power Onboard to help in their communities,” a Ford representative told Auto News in a statement. “We’re proud to pitch in to help Texas in this time of need.”

The F-150’s PowerBoost generator comes in two sizes, either a 2.4-kW generator or a 7.2-kW system. In the memo, Ford said 415 of these trucks are parked at dealerships that can be lent out to people and businesses in the community during this historic event. 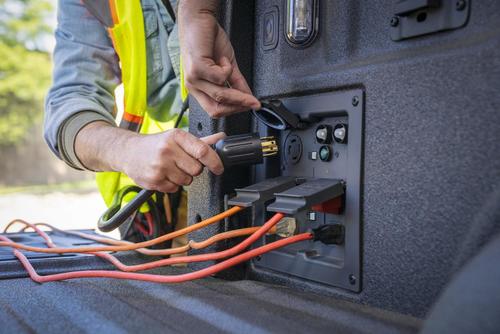 While 415 rolling truck generators aren’t going to make a big difference considering hundreds of thousands of people are still without power, it shows compassion for this week’s crisis, where up to 15 million people froze in their homes.

… meanwhile, Texas Sen.Ted Cruz left the state for Cancun as millions froze. He eventually returned back to America after a public uproar.

Another example of the all-new Ford F-150 with Pro Power Onboard making a difference in Texas. Proud! pic.twitter.com/6jyY70abcv

“The situation in the SW US is so difficult.  Wish everyone in Texas had a new F150 with PowerBoost onboard generator….”

The situation in the SW US is so difficult. Wish everyone in Texas had a new F150 with PowerBoost onboard generator…. https://t.co/KTgJpqjvPH

“Proud we are helping in Texas!” Levine tweeted.

At least 37 people have died across the country due to freezing weather and storms. This week, Texas was on the cusp of transforming into a third-world country as many critical infrastructures went offline.

After this week, it wouldn’t shock us if generator sales surged in the state, as the loss of power this week was undoubtedly traumatizing for millions of people.