This month JPM quant Marko Kolanovic made the bold prediction that the world has entered a new commodity supercycle. Across the board, commodity prices have been soaring as inflation pushes higher. But there’s one bean that is off everyone’s radar that continues to stumble as record surplus and poor demand have kept prices muted.

On Thursday, the International Cocoa Organization (ICCO) released its monthly report that specified a massive surplus in global cocoa was reported for the 2020/21 season that runs through to the end-September.

We’ve outlined before concerns about a demand collapse in cocoa markets due to the virus pandemic.

Cocoa’s demand slump could be due to less chocolate consumption among consumers as many restaurants, resorts, movie theaters, concerts, and other entertainment forms have had capacity limitations or closed in the last year.

For instance, cocoa processors are not expecting a revival in demand this year as the virus pandemic suppresses air travel and consumer spending around the world, according to Bloomberg.

Cocoa Association of Asia said chocolate demand could increase in the second half the year as travel restrictions are lifted if vaccine roll-outs are successful.

“In terms of absolutely strong recovery in the next couple of quarters, that’s a tall ask,” chairman Alvin Lee said, adding that several countries are seeing new waves of infection.

“The second half could be stronger because of a combination of increasing demand and restocking.” 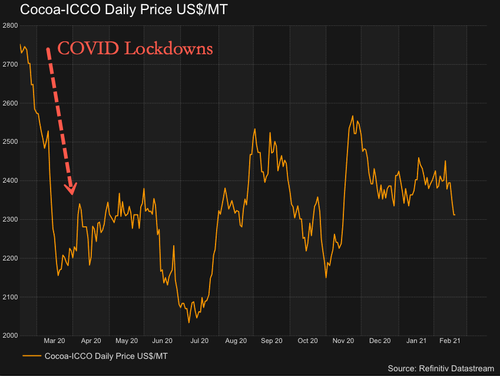 Here we show how cocoa prices are negatively diverging the Bloomberg Commodity Index as it rockets to the moon. 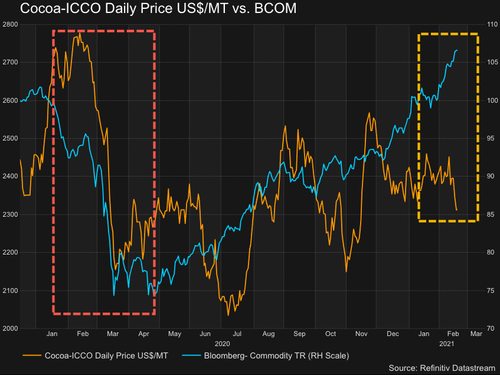 Did Dr.Cocoa just replace Dr.Copper as an indicator of global economic ‘recovery’? We will have to see…