For the past two months, Zero Hedge has been especially constructive on the uranium sector (and its handful of beaten down stocks), which we, and others, suspect may benefit tremendously as the sector gets swept up in the ESG euphoria many expect to follow the collapse of Texas’ independent power grid during this bitter winter storm. While conservatives have already attacked windmills and other “green” energy for contributing to the grid’s failure in the face of record low temperatures and snow in Texas (which never “winter-fied” its power grid)…

…Many on the left, including AOC and other Green New Deal types, are using the opportunity to push their agenda own. 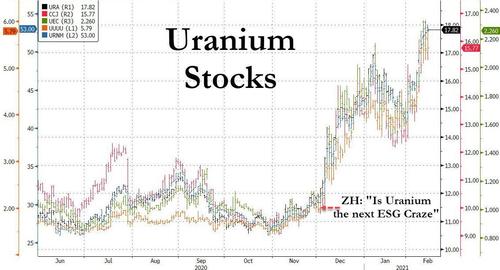 Somewhere in the middle, uranium bulls have been growing increasingly convinced about the commodity’s prospects, as prices have trended after roughly a decade in the unloved wilderness. Will nuclear be the next “ESG Craze”?  Hugh Hendry and Michael Burry (two iconic hedge fund managers) have both plugged nuclear power, with Burry calling on the Dems to “convert the US to nuclear” adding the hashtag #greenfuturenow.

In a recent Bear Traps Report, Larry McDonald wrote that one of the “cons” of nuclear is what to do with the potentially harmful waste.

Nuclear is so much better for the environment but the two major issues environmentalists site as problems is discharged cooling water than harms fish due to warmer temp and micro leaks that go undetected. How to dispose of contamination is an issue too. I believe all these things have been addressed in the last couple decades and micronuclear sites are a way to limit fallout concerns, albeit extremely low. However, Japan didn’t do proponents of nuclear any favor and hard to ensure total safety when the Earth can move below you…

Well, in an interview with CNBC’s Andrew Ross Sorkin on Thursday, billionaire Bill Gates joined in the chorus of pro-nuclear voices (something that he has long supported) as he sat for an interview on CNBC to plug a new book he is selling.

Asked pointed blank if Gates ever thought nuclear power would ever be politically palatable again, he responded “absolutely”, adding that nuclear – counter to the contemporary wisdom – is actually safer than natural gas and other fossil fuels, when one accounts for deaths from inhaling coal particulate and natural gas pipelines exploding.

“The deaths per unit of power of these other approaches are far higher. And the miracle is I’m not even talking about the current generation of nuclear. There’s a new generation that solves the problem of economics…which is the big problem with nuclear” while also taking care of some of the safety issues.

Gates then seized the opportunity to plug Terrapower, a public-private partnership (with money mostly from Gates), along with other government project, before later adding that the new generation of nuclear companies are figuring out how to mitigate threats, like the cleanup of waste (by burying it deep underground).

Watch the full interview below: