Texas Sen. Ted Cruz is being roundly slammed on social media by Texans and non-Texans alike after it became public that he traveled to sunny Cancun on Wednesday as millions in Texas remained without power and heat for a fifth day.

The Senator on Thursday confirmed the trip to Mexico, which he said was with family members, claiming he traveled there Wednesday evening.

In a statement to the Hill, Cruz insisted he took the trip to be with his young daughters since they had the week off from school.”

“This has been an infuriating week for Texans. The greatest state in the greatest country in the world has been without power. We have food lines, gas lines, and people sleeping at the neighbors’ houses. Our homes are freezing and our lights are out.”

“With school cancelled for the week, our girls asked to take a trip with friends. Wanting to be a good dad, I flew down with them last night and am flying back this afternoon.”

The senator, who infamously held out as Trump’s last primary opponent back in 2016, added that he and his family had lost power “like millions of Texans,” though he insisted he and his staff were in “constant communication” to help with state ad local leaders “to get to the bottom” of what happened.

“Like millions of Texans, our family lost heat and power too,”Cruz said.

“My staff and I are in constant communication with state and local leaders to get to the bottom of what happened in Texas,” he continued. “We want our power back, our water on, and our homes warm. My team and I will continue using all our resources to keep Texans informed and safe.”

According to flight records, Cruz (the Senator, at the very least, without his family) traveling back to Texas on Thursday to deal with the fallout of their trip – which has turned into a PR disaster – potentially without power and clean water.

And just like that, Ted (Rafael) Cruz seems to be on his way back to Texas.

A photo of Cruz circulated on the Internet Wednesday showing him at an airport with a massive carry-on bag. 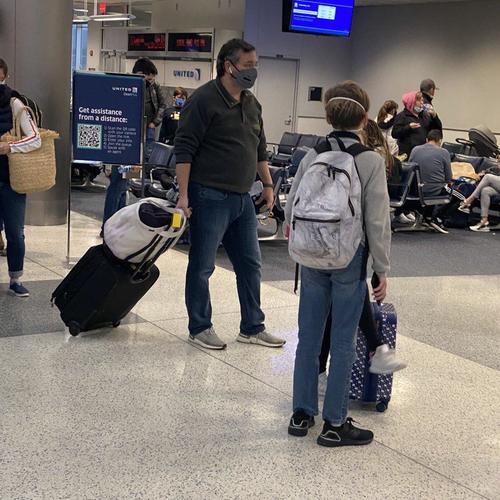 Then Fox News and the AP managed to confirm the story, though the senator has been silent about the issue until now.

I don’t understand how/why i see people defending the actions of an elected official taking a trip out country while his people struggling with no power/water. Mind boggling

@tedcruz Did you have a nice few hours in Cancun while millions froze without electricity, water, or any connection to the outside world back home?

You should have said .. “Jill and I are doing the opposite of Senator Ted Cruz and …” https://t.co/4D1gwlblja

Many lashed out on social media after the first reports about Cruz’s trip emerged, while also attacking him about earlier tweets attacking California and its power grid.

Cruz conceded Tuesday that he had “no defense” for these earlier tweets, adding, “A blizzard strikes Texas & our state shuts down. Not good.”

Nearly three dozen Texans have died due to the outages and the freezing weather conditions.