It is looking increasingly certain that Democrats in the NY State legislator – both the state assembly and the Senate – will move to strip Gov. Andrew Cuomo of his emergency COVID powers, imposed nearly 1 year ago, just days after the first cases were confirmed in New York.

Overnight, a flurry of unflattering news reports hit. In one, a New York Democrat, Assemblyman Ron Kim, said the governor had threatened to “destroy” him after Kim criticized a top Cuomo staffer heard on tape telling state lawmakers that Cuomo had worried the Trump Administration would try to use deaths in NY’s nursing homes – eventually found to be nearly twice the number initially reported – as a “political football” to attack Cuomo.

More importantly for Cuomo, it was reported last night that leaders of the New York State Senate would move to strip Cuomo of his emergency pandemic powers granted during the pandemic, an extremely rare rebuke for the governor from Democrats within his own party. The Senate’s measures, which could be voted on as soon as next week, highlight the growing animosity between Cuomo and state lawmakers since the governor admitted to intentionally withholding critical data on virus-related deaths from the state legislature in a Monday holiday press briefing. 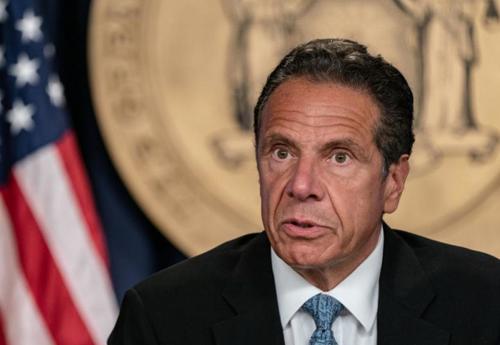 Kim said the governor – in a call last Thursday – ordered him to walk back criticisms of a top Cuomo aide whose leaked comments on nursing home data sparked a bipartisan furor. An adviser to Cuomo said Wednesday that Kim was “lying” about the conversation, per the Washington Post. The governor also lashed out at Kim during a news conference, accusing Kim of having a “long and hostile relationship” with his office.

Even though Cuomo’s emergency powers technically expire April 30 (unless they are extended) it has been clear for weeks now that Dems in the legislature would soon move to punish the governor for what was an obvious mistake during the COVID response. Back in March, during the earliest days of the crisis, NY State issued an order requiring nursing homes to readmit COVID-19-positive patients returning from hospitals. This policy has widely been blamed for the state’s 15K nursing home deaths, a number that was disclosed by the Cuomo Administration with a significant delay.

Cuomo essentially admitted to withholding the real death numbers, saying his office was simply swamped with the response after the Trump DoJ (followed by the NY legislature) requested data on nursing home deaths. It was part of an effort by Trump to investigate nursing home deaths in a handful of states, including NY and New Jersey.

Nine Democratic members of the New York State Assembly, including Kim, said in a letter Tuesday that they believe it is “unambiguously clear” that Cuomo intentionally obstructed justice, criticizing a “criminal use of power.”

As we learned last night, Cuomo’s problems have been compounded by an investigation, recently launched by the FBI and the US Attorney for the Eastern District, which is reportedly in its earliest stages, which is seeking to investigate the governor’s handling of nursing homes during the pandemic. However, it’s not known whether the investigation is specifically targeting Cuomo or “any individual” – perhaps members of his staff or others – only that it was recently launched.

As even the NYT admitted during its coverage of the latest Cuomo news, “the inquiry was another clear indication of how the climate has shifted dramatically for Mr. Cuomo since March, when he emerged as a prominent voice in the health crisis, using his daily briefings and invocations of his family to inform and calm a nation of viewers who turned to him as the virus began to spread. Now, much of that good will has evaporated.

Cuomo used his emergency powers to sign dozens of orders and direct the state’s COVID response from the top down. However, over the last year, he has apparently chafed many Dems and Republicans in the state legislature.