Millions of Texans woke up for the sixth day on Thursday, as one of the nation’s wealthiest states can barely supply electricity to its residents. The power crisis has spread well among its borders crippling Northern Mexico.

According to NYPost, at least 2.7 million Texas households were without heat, electricity, or water on Thursday morning as a polar vortex air mass continues to linger in the Lone Star State.

The death toll from the historic cold snap and multiple winter storms has increased to at least 30. Besides power plants, the deep freeze has crippled critical infrastructure systems across the state, such as water treatment plants and cellular networks.

“This is in many ways disasters within the disaster,” said Judge Lina Hidalgo, the top elected official in Harris County, which encompasses Houston. “The cascading effects are not going to go away.”

In a note Wednesday, we asked if “Is Texas Facing A Humanitarian Crisis?” Come to find out, the answer is yes. The cascading effects of days without power have effectively transformed some parts of Texas into a third-world country. 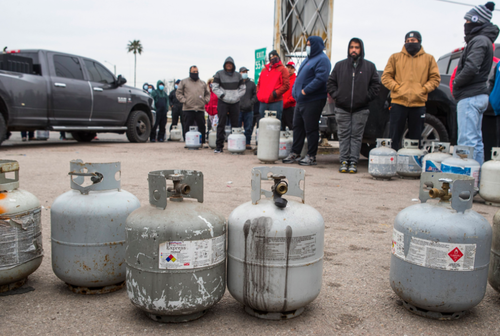 The local economy is in tatters as one-fifth of the nation’s refining capacity has come to a screeching halt. Readers in other states should prepare for a surge in crude product prices, such as gasoline and diesel. Also, the state’s oil and natural gas production has ground to a halt.

Gov. Greg Abbott announced Wednesday that he has forbidden gas producers from selling to power producers outside its borders through Feb. 21.

The disruption has also spilled over into Mexico, where the US has curbed natural gas exports, resulting in power stations grinding to a halt.

The plummeting natural gas exports from the United States to Mexico amid an Arctic cold spell in the country that has led to a gas demand surge is causing blackouts in northern Mexico, with some 4.77 million households and businesses left without power on Monday.

Argus noted that most of the natural gas Mexico receives from the United States comes from the Permian, where the production of both oil and gas has been affected by the cold weather that has caused power outages across Texas.

Oil wells are being shut down, and so are refineries along the Gulf Coast, Reuters reported earlier today, adding oil and gas pipeline operations were also disrupted by the weather.

The blackouts, Bloomberg reports, will strengthen the government’s argument that Mexico needs to be less dependent on energy imports, with President Andres Manuel Lopez Obrador spearheading the drive to reduce this dependency. Obrador wants to boost Mexico’s domestic oil and gas production to tackle the problem, but this has proved challenging without the participation of private energy companies as the president seeks to fortify the dominant status of state energy major Pemex.

Refinitiv Eikon data shows natgas flow from the US to Mexico plunged 75% over the last week after Abbott directed a ban on gas producers exporting outside its borders. Power cuts have affected millions and led to automobile manufacturers shuttering operations this week because of the lack of natgas needed to power plants.

There’s also talk of an agriculture disaster in Texas as its citrus crop could amount to significant losses. The impact of the cold weather and storms won’t be realized for another few weeks. Growers are already warning that crop losses could be substantial. Since Texas is the nation’s third-largest citrus-producing state behind California and Florida, a loss in crop could result in skyrocketing prices – comes at a time when many Americans are dealing with soaring food inflation. At the same time, others can barely afford to pay rent and feed their families.

The worst is likely over as warmer temperatures could be seen by the weekend. But for weeks after, Texas will be dealing with a multitude of problems related to a power grid collapse that is still ongoing.

To biggest takeaway from the largest controlled blackout in American history is that trust in private corporations and government to manage your well-being is set to collapse even further. Parts of Texas are effectively a third-world country this week – maybe being a prepper and storing a few cans of beans, a couple of coins of silver, a few Bitcoins, some ammunition, a generator, and clean water might not be a bad idea.