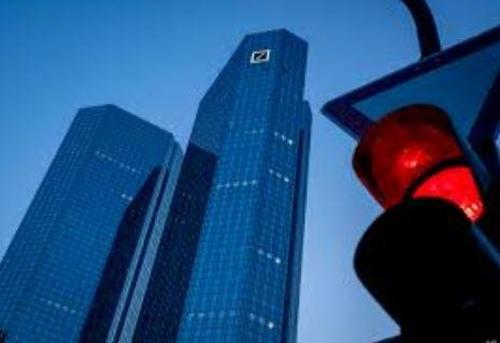 For years, workers at Germany’s largest (and according to many, most insolvent) bank were told they won’t get a bonus and they should be happy that they have a job. Then, last year, things finally looked up when the bank whose stock price trades not too far from its all time lows, finally resumed the practice of paid out a modest bonus pool of €1.52 billion for 2019, which is a small fraction compared to what other bank workers get. Excitement then started to pick up in December, when reports circulated that Deutsche Bank was considering raising bonuses for traders by 10%, and peaked in outright euphoria a few weeks ago when Bloomberg reported that the final numbers could be even higher in light of the bank’s impressive Q4 results which included the first annual profit since 2014.

Unfortunately, it was not meant to be and it now looks like any hopes for further bonus inflation have just popped, only instead of blaming management for yet another year, DB bankers have a new nemesis: the European Central Bank.

It was the ECB that objected to DB’s proposed payout levels, which forced the bank to scale back plans for its bonus pool Bloomberg reported, noting that this “highlighting the challenges of rewarding top performers while heeding demands for restraint during the global pandemic.”

CEO Christian Sewing had promised to reward high-performing staff after soaring revenue from securities trading helped keep his turnaround on track even as the global economy slumped. But those traders will be disappointed after regulators urged banks to “show constraint” after receiving unprecedented relief to weather the crisis, which has wreaked havoc on many other industries.

While Germany’s largest bank had initially planned to pay out more than €2 billion euros for staff performance in 2020 – which is a sad fraction of what other, more stable banks pay out –  that amount has been cut after several rounds of talks with the central bank in recent months, Bloomberg sources reported. The ECB has now dropped its reservations, after the final number has been trimmed.

“We’re obviously very mindful of the guidance that we’ve got from the ECB to apply moderation in variable compensation,” Chief Financial Officer James von Moltke said in a Bloomberg TV interview in early February. “We of course need to balance that with what was a strong performance year and the need to compensate people for that performance on a competitive basis.”