China Most Active In Spreading Disinformation On COVID-19 Origin: Report

China Most Active In Spreading Disinformation On COVID-19 Origin: Report

Authored by Frank Fang via The Epoch Times,

China was the most active country in propagating disinformation on the origin of the COVID-19, according to a newly-released report by the Associated Press (AP) and the Digital Forensic Research Lab of Washington-based think tank Atlantic Council. 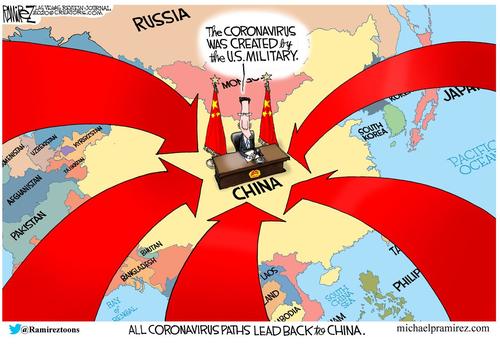 The report was the results of a nine-month joint research project, after analyzing millions of social media posts and articles that were published in the first six months of the COVID-19 outbreak. It examined the false narratives that took hold in four countries: China, Iran, Russia, and the United States.

China was much to blame for the disinformation on COVID-19 origin, which is caused by the CCP (Chinese Communist Party) virus, commonly known as the novel coronavirus.

“Particularly in the period immediately following COVID-19’s initial spread, factual information about the disease, its origin, and its symptoms was lacking or withheld–most notably by China–providing the ample space for misleading and malicious information to take root,” according to the report.

The Chinese regime concealed from the public information about the disease and also silenced eight whistleblower doctors, including ophthalmologist Li Wenliang, who were the first to warn about an “unknown pneumonia” outbreak in the Chinese city of Wuhan on Chinese social media.

The report pointed out that users on Chinese social media Weibo, China’s equivalent of Twitter, began writing about an unproven conspiracy theory connecting the United States with the outbreak on Dec. 31, 2019. For example, one Weibo user wrote, “Watch out for Americans,” while another wrote about the United States being one of several countries in the world that houses a P4 bio-safety laboratory. 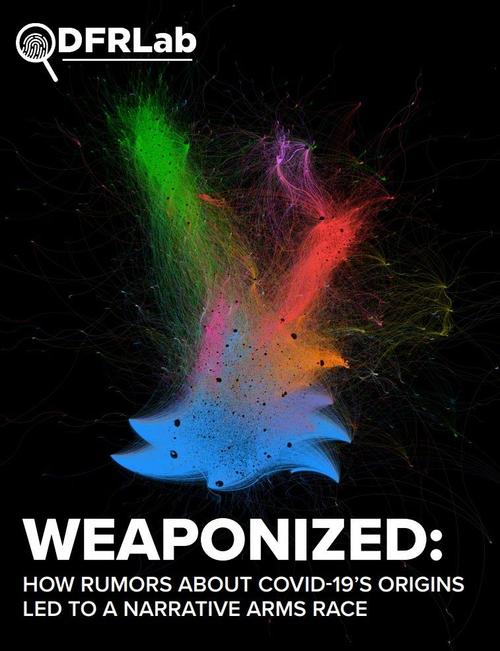 But none of these early speculations on Weibo was “coordinated or particularly far-reaching.”

Meanwhile, the P4 lab at the Wuhan Institute of Virology has long been speculated as the source of the virus in a potential lab leak. A fact sheet released by the U.S. State Department last month stated that it “had reason to believe” several researchers at the institute fell ill with COVID-19-like symptoms in the autumn of 2019, contradicting a claim by a researcher at the institute who said there was “zero infection” among lab staff and students.

A recent investigation by a team of World Health Organization (WHO) experts in Wuhan did not rule out the possibility that the virus was leaked from the P4 lab, but concluded that the theory was “extremely unlikely.” Last week, WHO Secretary-General Tedros Adhanom Ghebreyesus suggested more research was needed to study the different origin theories of the virus.

“China initially preferred to boost international perception in its favor by amplifying stories about its benevolence in assisting other countries to combat the virus,” according to the report.

In late February last year, China’s state-run media began to publish articles suggesting that the virus may have originated outside of China, according to the report. Some outlets also provided negative coverage of the U.S. response to the outbreak.

“As the disease persisted, however, China began to push narratives that painted its geopolitical competitors in a negative light, including pushing conspiracies such as the idea that COVID-19 was a U.S. biological weapon,” the report added.

The report analyzed a series of Twitter posts made by China’s foreign ministry spokesperson Zhao Lijun in March 2020. In a tweet on March 12, Zhao accused the United States army of bringing the virus to Wuhan.

The report found that Zhao’s tweets targeting the United States on March 12 and 13 last year had “accumulated nearly 47,000 retweets and quote tweets, [was] referenced in at least 54 languages, and favorited more than 82,000 times” as of Feb. 13. These tweets were also “amplified by at least 30 different Chinese diplomats and state-run accounts.” 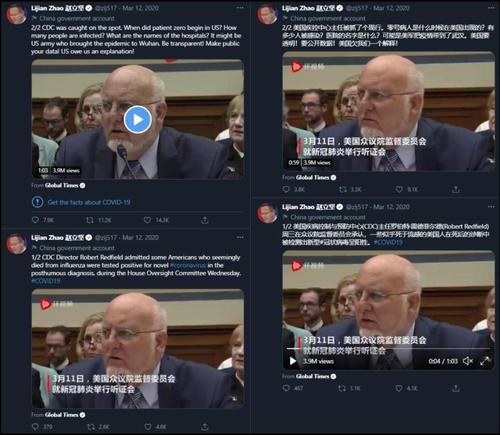 Zhao’s tweets also had an enormous impact on China’s domestic audience. According to the report, popular hashtags referencing his tweets were viewed by Weibo users more than 300 million times as of Feb. 13.

The report also analyzed online activities following Zhao’s other tweets in March, which reposted a link to an article by Larry Romanoff published on Global Research Canada, a site known for advancing conspiracy theories on topics such as global warming. The article suggested that the virus might have leaked from Fort Detrick, a prominent military biomedical research lab in Maryland.

There was a spike in Google searches for “Larry Romanoff” around mid-March, following Zhao’s tweets, according to the report.

Recently, Chinese foreign ministry spokesperson Hua Chunying revisited the conspiracy theory by citing Fort Detrick. She said during a Jan. 18 press briefing that the United States should invite WHO experts to “conduct origin tracing” in the country.

“If the United States truly respects facts, it should open the biological lab at Fort Detrick, give more transparency to issues like its 200-plus overseas bio-labs,” she said.

Moreover, on Twitter, “the number of Chinese diplomatic accounts more than tripled on the platform between May 2019 and May 2020, from 40 to 135, and the output doubled and became more aggressive and conspiratorial,” the report stated. Due to China’s firewall, Twitter is not accessible by ordinary Chinese citizens.