One of the short-squeeze superstars of January’s reddit rebellion, movie chain AMC Entertainment (whose short interest has dropped to 8.6% of float), soared this morning as investors focused on a report from the French version of Forbes, according to which Amazon was rumored to have had conversations with Amazon. The news sent the stock sharply higher in premarket trading. 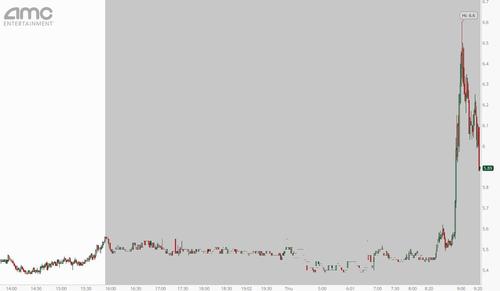 From the Forbes report, google translated:

AMC’s financial health, which now owes $ 4.9 billion (€ 4 billion) in debt, has long been in question, and several analysts have argued the bankruptcy was just a matter of time, which would put Amazon in the position of a white knight coming to its aid. The TV channel is currently valued at less than $ 500 million (€ 415 million), which invites speculation over recent past deals such as the acquisition of Whole Foods , which was worth around $ 13.7 billion. of dollars (11 billion euros), in June 2017.

For now, this is just speculation. But why would giant Amazon want to buy the world’s largest movie theater chain? First of all, Amazon already produces a lot of content through Prime Video,so taking control of outlets to show this content might make sense. Until a few months ago, US antitrust rules prevented studios from acquiring movie channels, so as to prevent a single player from controlling the entire value chain, but in November 2019, the Department of Justice announced that this rule, which had been in place since the 1940s, would be revised due to increasing complexity and the presence of new players in the industry, such as streaming companies.

One reason cited why Amazon could be interested in the theaters is to get broader exposure for its original content in its war for market share with Netflix:

It is important to note that content created by companies like Amazon or Netflix , for example, cannot participate in prizes and contests like the Oscars if it has not been shown in theaters, restrictions which could easily be removed if the company itself controlled the world’s largest network. In addition, it could also serve as an incentive to attract and retain creative talent, according to the principle: “sign with me and you can broadcast your content first in my rooms, then on Prime Video  “.

Forbes then speculates that an AMC acquisition would merely be the latest physical expansion for the world’s largest online retailer:

Interest in physical premises, on the other hand, is nothing new for a digital chain dominator like Amazon, which has already made inroads into distribution with up to seven different store types. Movie channels could also be used to attract more users to its Amazon Prime subscription model, one of the company’s most profitable businesses, in the same way the company does with its content, including , for example, the possibility of going to its cinemas to watch a certain number of films each month. For Amazon, the subscription model is extremely cost effective since everyone who joins the club usually starts consuming more, and the company understands this model very well – they beautify the deal and the number of things you can do with your membership up. that there is no longer any chance that you will consider terminating it.

We are talking about a content exploitation company, which has been venturing into the digital environment for some time now, but which could undoubtedly benefit greatly from the synergies created with what is also the world’s biggest competitor in terms of cloud computing : you create your film, you put it in the cloud, and it will automatically be available on 2,200 screens in 244 theaters in Europe and on more than 8,200 screens in 661 theaters in the United States.

One final point: for Bezos purchasing AMC would be pocket change:

Is Jeff Bezos, the richest man in the world, about to acquire the world’s largest movie theater chain? For him, that would be about as expensive as buying a bucket of popcorn is for us at the movies.

So far Amazon has not commented on the specaultion.