One day after we learned that the Omaha billionaire had slashed his Wells Fargo stake by 59% in Q4 – a company which as a reminder was once Buffett’s biggest bank holding – Wells Fargo stock soared on Wednesday morning on a Bloomberg report that the bank has secured Fed acceptance for its overhaul plan tied to the Fed imposed $1.95trl cap on the Co’s assets, which has prevented the company from aggressively growing its balance sheet and put a cap on its stock price.

According to Bloomberg, “Fed officials have privately signaled to the scandal-ridden lender that they accept its proposal for overhauling risk management and governance, according to people with knowledge of the matter. Chief Executive Officer Charlie Scharf’s team submitted the revised plan — thousands of pages long — in September, after his predecessors stumbled in clearing what turned out to be a surprisingly high hurdle.”

As a reminder, as one of the last actions of Janet Yellen as Fed chair before she was replaced by Jerome Powell, the Fed imposed an unprecedented cap on the firm’s assets, limiting it to its size at the end of 2017. The cap was meant to pevent the company from rapidly increasing its lending volumes and taking measures to attract capital reserves – one of ten “consent orders” imposed on the bank following the massive fake-account issues in 2016.

While winning the Fed’s acceptance on the overhaul plan is the second of four steps toward getting the sanction lifted according to Bloomberg, much work remains for the San Francisco-based company to move beyond its scandals. A number of top executives privately expect Wells Fargo won’t escape the asset cap until late this year at the earliest, while key Fed officials see the process dragging into 2022 or beyond, Bloomberg reported in December.

Still, since previously bank officials had not given any indicative timeline/date for when they expect the Fed to remove this asset cap, the news served to spike some optimism that Well Fargo’s Fed-imposed purgatory is coming to an end, and WFC shares spiked, rising from $34.50 to $36.90 over the course of ~10 minutes, with gains in excess of 6% on the session making Wells the best performing stock in the S&P500. 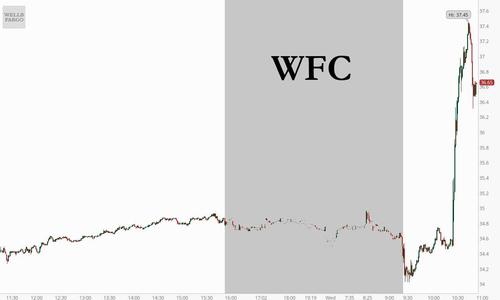