The SEC just released its latest update for Fails-to-Deliver data and it sheds a very bright light on what was going on during the GameStop (GME) debacle in January (the data is only released every two weeks so this is the first opportunity to see what was going on).

‘Failure to deliver’ (FTD) is how many shares were not accounted for at the end of the day.

So, why do trades fail?

There are three key reasons why trades fail: (1) issues with funding and inventory of investment assets; (2) inefficient manual processes; and (3) failures of automated systems to produce accurate data and integrate with the reconciliation process.

With funding and inventory issues, the buyer:

Or, the seller may not have possession of the security to deliver. This often occurs when the investment manager’s underlying client is engaged in securities lending programs where the security is not in their possession at the time of settlement.

And the data shows GME has been failing to deliver in some capacity for weeks now.

As Bloomberg reports, for a number of days during the GME short-squeeze, there were more than a million shares FTD daily (peaking with around $359 million worth of shares on Jan 28th)

About 2.1 million GameStop shares failed-to-deliver on Jan. 26 before falling to 138,179 on Jan. 29, the day after Robinhood and other brokerages began restricting trading in so-called meme stocks.

Given the T+2 settlement, the following chart shows the period related to the chart above… 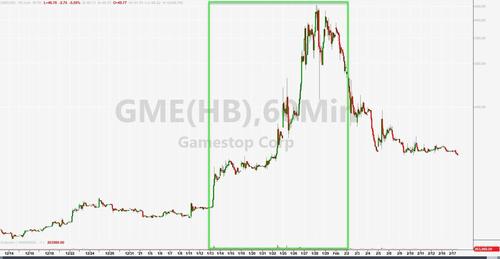 The fact that GME made it to the Top 10 list on SEC’s FTD data suggests more than a simple SNAFU. It reinforces what many have attempted to dismiss as ‘unproven conspiracy theory’ – the fact that a number of investors were (synthetically or not) naked short this stock.

As Bloomberg points out, short sales – when an investor borrows shares, sells them and then tries to buy them back at a lower price to profit from the difference – are an everyday market occurrence. Naked short selling, the illegal practice of selling shares that aren’t known to exist, is just one possible cause of a failure-to-deliver, with more quotidian reasons being human error and administrative delays, and, of course, ahead of tomorrow’s hearing (blaming and shaming fest), the SEC is careful to cover it’s proverbial ass by claiming that:

“Fails-to-deliver can occur for a number of reasons on both long and short sales,” reads a disclaimer on the SEC website.

But in this case – amid massive short-interest (synthetic and all) it is quite evident that it was indeed ‘naked’ shorting that was to blame for the FTDs.

As wherearetheshares.com notes in the chart below, the level of GME FTD has been an order of magnitude greater than other retailers… 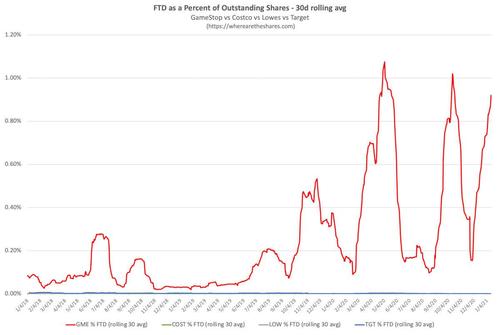 Additionally, we note that Gamestop was on the NYSE Threshold Security List (equity securities that have an aggregate fail to deliver position for five consecutive settlement days at a registered clearing agency totaling 10,000 shares or more and equal to at least 0.5% of the issuer’s total shares outstanding) for 39 consecutive days (Dec 8 – Feb 3).