This Is What Hedge Funds Bought And Sold In Q4: Complete 13F Summary

This Is What Hedge Funds Bought And Sold In Q4: Complete 13F Summary

In the aftermath of late January’s massive short squeeze fireworks, 13F reporting season – which had lost much of its luster in recent years as hedge funds lost much of their impact in a centrally-planned world – was once again interesting, if only to find who had extra exposure to the January short-squeeze turmoil. Of course, we should caveat that as usual, all of the positions disclosed in today’s round of 13Fs were stale by at least 45 days, and as such there has certainly been significant rotation out of the high beta and most shorted names in late January and early February.

With that said, and as noted earlier, the big highlight was Warren Buffett’s Berkshire Hathaway which trimmed its Apple holding in the fourth quarter, while reporting formerly secret stakes in Verizon ($8.6BN), Chevron ($4.1BN) and Marsh & McLennan ($499MM). 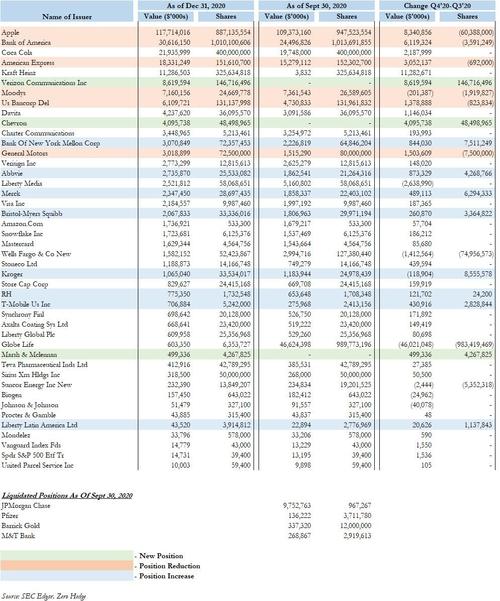 Berkshire’s reduction in Apple stood in contrast to other positions investment funds revealed in regulatory filings for the quarter, which showed several favoring megacap tech companies according to Bloomberg which notes that Microsoft has been an early winner in 13F filings released so far as major hedge funds bought positions. The software maker was a top new buy at Bridgewater and Singapore’s Temasek Holdings, while D1 Capital Partners and Tiger Global Management also boosted their stakes.  A handful of Tiger Cubs (firm run by alumni of Julian Robertson’s Tiger Management) also boosted their stakes in Microsoft with Viking, Tiger Global and Maverick all adding to their positions in the software giant, which gained just 6% in the quarter.

Another megacap technology company, Facebook, was a top new buy at Gabe Plotkin’s Melvin Capital Management, although it is likely that after the fund’s flameout, it was likely forced to liquidate some or all of its stake.

Meanwhile, recent initial public offerings Airbnb and DoorDash also received attention from funds. Both companies were top new buys at Tiger Global and Temasek. Banks have been more divisive. Bridgewater snapped up shares of JPMorgan, Bank of America and Citigroup, while Berkshire exited its positions in PNC Financial Services Group Inc. and JPMorgan, and it cut its stake in Wells Fargo.

Going down the list, Bloomberg notes, that Philippe Laffont’s Coatue Management increased its stakes of 26 companies in the fourth quarter, including adding 1.63 million shares of Walt Disney which surged 46% in the period. That brought Coatue’s stake in the world’s largest entertainment company to about $2 billion at year-end, making it the fund’s biggest long U.S. holding. At the same time, Coatue cut its exposure to the tech sector by about 6%, but it could be that the firm was just rebalancing the portfolio given the jump in those shares.

Tiger Global made a notable move in selling a major chunk of its Sunrun stake — it sold an investment that has been incredibly profitable for Chase Coleman’s firm. Tiger Global made $1.5 billion on the solar company’s stock last year, and it has been among the best performers in Tiger Global’s hedge fund and long-only fund.

Saudi Arabia’s sovereign wealth fund is pursuing investments on video-game makers. The Riyadh-based Public Investment Fund bought stakes in Activision Blizzard Inc., Electronic Arts Inc. and Take-Two Interactive Software Inc. The three stakes had a combined value of almost $3.3 billion at the end of December, according to its filing.

Below  is a snapshot summary of some of the key position changes revealed at the more popular hedge funds in the 4th quarter, courtesy of Bloomberg.