By Ian Lyngen and Ben Jeffery, rates strategists at Rabobank

The selloff in Treasuries appears to have stabilized overnight after 10-year yields reached as high as 1.331% and 30s touched 2.11%. These extremes were accompanied by an elevated volume profile with cash trading at 226% of the 2-week norm and 10s garnering 37% of the trading activity – with much of Asia still on holiday. The overseas open on Thursday will prove yet another test of dip-buying interest as rates are back to February 2020 levels. The slope of the curve is even more dramatic, with 2s/10s reaching 121 bp for the first time since March 2017 – the peak from December 2016 of 137 bp is an obvious target in the event we’re in the midst of a bearish respite rather than a bullish reversal.

With 2-year yields at just 11 bp, the bulk of the heavy lifting for further steepening would clearly be a function of underperformance of duration. The other benchmark curve of note, 5s/30s, pressed as steep as 155 bp on Tuesday, offering further satisfaction to those in the resteepening camp. The balance of a sharply steeper curve while rates remain in a historically low environment isn’t lost on us. In fact, with 2s/10s establishing a local high of 121 bp while 10s managed to backup to just 1.331%, investors are left to contemplate just how far the ‘best case’ steepening can extend. 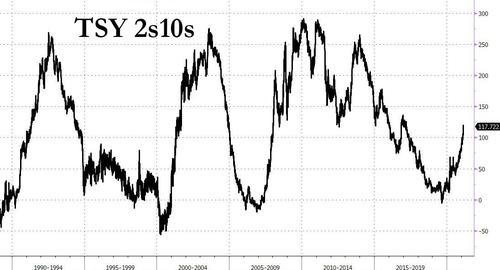 Using the 2016 post-GOP sweep and all the pro-business/reflationary fervor that accompanied it as a guide, while conceding 2s are effectively locked in an 11-13 bp range, this puts the outer-bound for 10-year yields at 1.48%-1.51%. These are levels that certainly conform with our broader range trading thesis for the year, although we’d expect more than a little support for 10s to develop as 1.50% comes on the radar. 5s/30s have already broken through the comparable steeps, leaving this reflationary trade with remarkably little technical guidance between 155 bp and 175 bp on the journey to the 2010-2014 plateau of 200 bp. Let’s not get too far ahead of the momentum currently at play in the Treasury market. While it’s certainly tempting to use those prior periods as important milestones, the realities of navigating out of the pandemic are anything but obvious as this stage.

In keeping with the theme of the price action itself being the ‘event’ this week, there was very little of relevance in terms of data or information flow overnight. Certainly nothing to warrant at 5 bp peak to trough move in 10-year yields. The underlying bearish impulses credited for the recent selloff remain well intact; progress toward a fresh round of stimulus continues apace, stocks are effectively at record highs with the S&P 500 already +4.7% year-to-date, reflationary ambitions are alive and well with 10-year breakevens at 225 bp, and the winter storms have left the front-month WTI contract above $60/barrel. This backdrop speaks to this week’s early price action as offering a comparatively ‘clean’ read of investors’ reaction-function to a technically driven backup in yields.

The macro stage gets somewhat more crowded today however, with retail sales offering an update on the pace of consumption during the first month of 2021. The weight of covid’s winter wave remains meaningful for the economic data and contributes a collective willingness to continue to dismiss the incoming data in favor of projections of a strengthening post-pandemic consumption profile. Precisely how long the market will be comfortable with flagging realized data while stocks and now yields are on the rise is one of the primary unknowns of the year ahead. One has to assume that by the second half, the fundamentals will once again be the key input for valuations in financial markets, as opposed to the present situation characterized by trading on expectations for an extension of the recovery throughout 2021 that relies heavily on expectations for herd immunity and post-covid consumption to roughly resemble those in place prior to 2020. While we’re certainly sympathetic to the ‘returning to normal’ narrative, it’s challenging to envision a scenario in which at least a few of the shifts in spending patterns don’t prove semi-permanent.

Tactical Bias: Rates trended one way on Tuesday as several key support levels were traded through with the market content the push the selloff ahead of retail sales, the 20-year auction, and FOMC Minutes. 1.273% in 10s represented the height of the dash-for-cash driven yield high from March of 2020 and with that now breached, the next meaningful test for the benchmark will be an opening gap from 1.332% to 1.337%. Beyond there is another wider unfilled trading zone from the early days of the pandemic a year ago at 1.431% to 1.471%, but a downtrade of that magnitude would need to overcome a decidedly stretched momentum profile. It promised to be a week when the moves themselves attractive much of the market’s attention, and in this context, we struggle to fade the repricing for now.

Within the breakdown of the price action, it is noteworthy that 10-year real yields have made it back above -95 bp for the first time since mid-January. In contemplation of the feedback loop between Treasuries and risk assets, our baseline angst cannot help but highlight the pickup and what it could suggest about the sustainability of current equity valuations. Indeed, as 10s approached 1.30% to begin the shortened week, the deluge of inquiries on the Fed’s comfort level with higher yields can be answered with a glance at domestic stocks. Given the relationship between equity volatility and broader financial conditions, the strike price of the Powell put arguably lies not in rates, but in equities which once again managed to set record highs despite comparatively elevated yields. This suggests even as real rates drift higher, as long as a material undermining of risk assets is avoided, there is little reason to anticipate the FOMC would act.

The latest update on Powell and Co.’s collective mindset will be the January FOMC Minutes release where two areas will be of primary focus. First is the outlook on financial stability and how the growing chatter surrounding bubble risk played into the dialogue among policymakers and the latest meeting. Fedspeak in the interim has downplayed the concern on financial excess, with Committee members instead emphasizing the state of the labor market and inflation as carrying far more weight in determining monetary policy. Second will be any indication as to the level of concern on the situation in funding markets and the distribution of risk on the decision to adjust IOER and/or the ON RRP rate at the March 17 policy decision. Given the rundown of the TGA and reserves that are only set to increase from here, the Committee may endeavor to be proactive on the change but any greater clarity would be welcome by front-end investors.

It will be a historic day in the primary market on Wednesday; at least as measured by the 20-year refunding which will almost certainly clear at the highest auction yield since the new bond was reintroduced. The $27 bn offering likely added a degree of bear steepening pressure to begin the week, and with 20-year yields crossing 1.90%, the strength of the bid that materializes on Wednesday will aid in calibrating expectations duration dip buying interest. Not solely in outright yield terms, but also relative to 10s and 30s there is reason to like 20s. On an interpolated 10s/20s/30s butterfly 20s are back to levels not seen since 2014 which should introduce some comparative demand upside in the context of a cheapening long end. In our endeavors to answer the question who is buying the record large net issuance figure it was revealing to see domestic investment funds claim and impressive 61.5% of last month’s auction which is the highest ever. We certainly won’t fight the bearish price action underway in Treasuries, but from a valuation perspective anticipate $24 bn in new 20s will be met with solid demand on Wednesday.