One month ago, Saudi Arabia shocked the world when it announced that it would unilaterally cut 1 million barrels a day of crude production starting next month in an effort to boost prices. The plan worked – perhaps too well – and quickly pushed Brent crude well above $60, or the price level where as we reported over the weekend US shale production tends to aggressively return production and where OPEC traditionally tries to keep prices from surging too high.

As a result, on Sunday we noted that  “oil prices have reached a critical threshold where OPEC+ must decide whether to increase production, or risk losing market share again to U.S. shale producers.”

Fast forward just a few days later when “the decision” appears to have been made, because as WSJ reports, Saudi Arabia plans to increase oil output in the coming months, reversing January’s big production cut and adding as much as 1 million barrels of oil.

… the kingdom plans to announce a reversal of those cuts when a coalition of oil producers meets next month, the advisers said, in light of the recent recovery in prices. The output rise won’t kick in until April, given the Saudis have already committed to stick to cuts through March.

Saudi Arabia’s move to reopen the spigots, while the rest of the group keeps them tight, comes as global demand for oil is expected to recover in the coming months. The recovery in oil prices has also been supported by an unexpected cold spell in the U.S., which has affected short-term crude production. Efforts by producers to reduce supply and rebalance oil markets, led by Saudi Arabia, have also shored up oil futures.

And so with WTI above $60, Saudi Arabia not only hopes to regain some of the lost market share, but to make it more problematic for US shale producers to jump in, who have been patiently waiting to pounce as soon as oil rises above $60.

That said, the WSJ warns that the plans could still be reversed if circumstances change – i.e., if oil prices tumble as traders price in the new supply – and the Saudis’ intention hasn’t yet been communicated to the Organization of the Petroleum Exporting Countries.

“We are in a much better place than we were a year ago, but I must warn, once again, against complacency,” Prince Abdulaziz bin Salman, the Saudi energy minister, said at a conference Wednesday. “The uncertainty is very high, and we have to be extremely cautious.”

Any boost in Saudi production could be problematic: as Newsquawk notes, crude prices at these elevated levels have prompted market chatter regarding OPEC+ politics and policy; it’s expected that hawkish producers, namely Russia, will exert some pressure on the group to ease output cuts, with recent commentary from Russia’s Novak also suggesting that the market is balanced.

However, Saudi will have to avoid a rift widening as the Kingdom itself is currently poised to reintroduce the 1mln bpd which was taken offline as a goodwill gesture in January. ING suggests “It is unlikely that the group would bring a little over 2.2mln BPD of supply back onto the market, aware that the market would baulk at such a decision”, but highlights that there is room for some sort of easing, contingent on how much output volume Saudi decides to return from its cut.

Whatever the outcome, the market is already pricing it in, and the report hammered both Brent and WTI, the former sliding by almost $2, while the WTI sliding from above $61 to below $60. 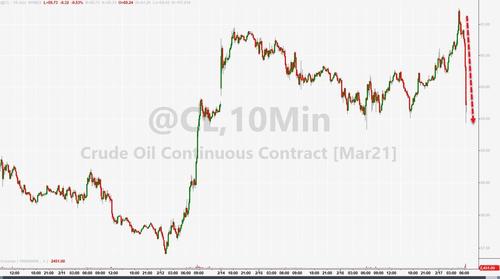 The good news for risk assets is that since oil is the key driver of breakevens, a drop in oil would remove some of the froth in both breakevens and 10Y yields… 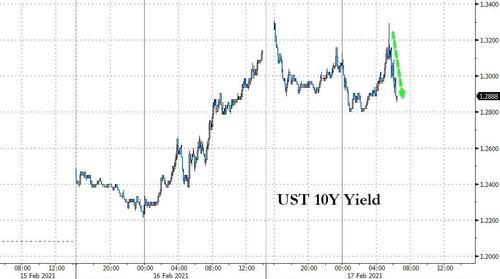 …. giving stocks some breathing room as they scramble to catch up to the recent furious selloff in rates.