Overnight, bitcoin surged almost 6% to about $51,431, ending a bout of weakness around $50K, and following delayed reaction to the news that MicroStrategy would sell $600 million of convertible bonds and use the proceeds to buy more of the tokens, a deal which has since been upsized to $900 million. 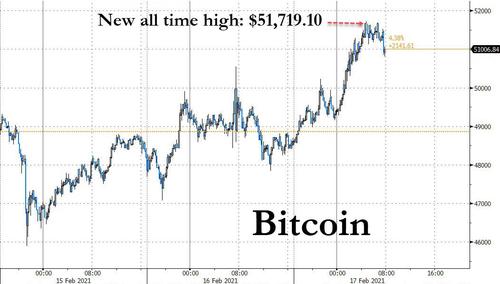 Tuesday had seen Bitcoin rise $50,000 for the first time ever, although that level failed to hold for more than a matter of minutes. MicroStrategy’s latest step is “a warning sign if there ever was one that things are getting out of hand in the crypto world,” Jeffrey Halley, a senior market analyst at Oanda Asia Pacific Pte, wrote in emailed comments.

JPMorgan Chase & Co. strategists said Bitcoin’s volatility needs to ease to prevent its rally from fizzling. Other commentators see a mania likely to end in a bust akin to the implosion in 2017.  The digital coin’s 60-day realized volatility is around the highest since May last year, though still below the levels seen around the peak of its last boom some three years ago.

Others naturally disagreed: the largest cryptocurrency is in a “parabolic advance” — the fourth in its twelve-year history, bullish analysts said. “Big picture $BTC Bitcoin is undergoing its third parabolic advance in the past decade,” chartiest Peter Brandt tweeted alongside an annotated price chart. Brandt added that should the advance be violated, a correction of 80% is “most common” as a bearish consequence. Such behavior was observed in 2018 after Bitcoin peaked at near $20,000 — the market bottomed out at $3,100 one year later.

As Cointelegraph reported, various indicators nonetheless suggest that Bitcoin is far from violating any uptrend, being at the start, rather than the end of its bull run. “$50,000 #Bitcoin is the new normal,” Blockstream CSO Samson Mow declared on Wednesday.

Discussing the new price highs, others noted that macro factors could converge to create a chain reaction of adoption, which would push Bitcoin further still into price discovery.

Data meanwhile showed that Bitcoin had taken the momentum out of altcoin growth with its moves over the last few days, with all of the top ten cryptocurrencies except Polkadot (DOT) seeing sideways price action.

“There are a number of reasons why Bitcoin is soaring, but what stands out most is the trend that MicroStrategy started and Tesla popularised: moving institutional balance sheets into Bitcoin to hedge against inflation,” said Nicholas Pelecanos, head of trading at NEM.

Meanwhile, as Bloomberg notes, activity in Bitcoin futures suggests traders don’t see a sudden end to the crypto rally, with spreads continuing to widen between the active contract and March futures.