As Hearing Looms, Here Is How Gamma Was Weaponized Against GameStop

As Hearing Looms, Here Is How Gamma Was Weaponized Against GameStop

In late January 2021, GameStop experienced a once-in-a-decade squeeze that has captivated the world’s attention. This was a premeditated and programmatic exercise, orchestrated by coordinated stock and option buying across the retail and professional community, that resulted in large institutional entities losing billions of dollars. These investment houses with significant short positions did not expect a stock with GameStop’s fundamental profile to increase +2,500% in price over less than three weeks; therefore, they did not have the controls in place to handle the incredible levels of stock and call option purchases. The frenzy drew comments from the White House, provoked a social media crackdown, caused brokerage units to restrict trading, and has led to a Congressional hearing on GameStop on Thursday, February 18th.

At SpotGamma, we offer the following analysis, segmented into three phases:

Phase One: The Setup 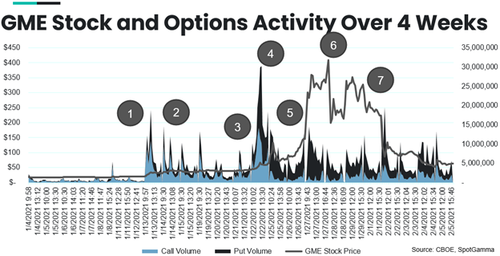 Phase One: Early in January 2021, Reddit/WSB and other retail traders began to focus on GME as a buying opportunity….

(1) January 11th [Initial Attention]: GameStop recruited a highly-respected industry veteran to their Board (Chewy Founder, Ryan Cohen). This garnered enthusiasm from the retail community and acted as the initial catalyst for these investors to start discussing GME as a potentially exciting stock to own. There was some initial buying in the $15-$20 range, then the stock quickly shifted higher to the $35-$40 range.

(2) January 13th-20th [Loading Up]: Members of the Reddit/WSB community started purchasing large amounts of call options. This significant call buying began to form the basis for the first of two dramatic upward stock movements within the “Weaponized Gamma Squeeze” setup.  A “gamma squeeze” can occur when a trader or group of traders purchase call options in bulk, causing market makers who sold them these options to buy the stock as a hedge.  This aggressive forced stock buying adds to the stock price moving steeply upward and pushes the stock price higher as market makers scramble to buy incrementally more stock at rapidly increasing prices.

This type of trade is not unique to GameStop.  Just last summer, SpotGamma coined the term “Weaponized Gamma” when in August a large fund, namely SoftBank, was reported to have purchased large and concentrated options positions in several top technology stocks. We assigned the term “weaponized” to connote the idea that options were being purchased for the explicit purpose of pushing market makers to purchase stock rather than investing with a belief in the company’s performance or value.

Here, again, “Weaponized Gamma” applies to the GameStop event because it’s clear that retail traders understood the concept of a “gamma squeeze” and collectively coordinated their options purchases to initiate large market maker stock purchases.  Their action pushed the stock price up – “weaponization”. This snowball effect caused GameStop’s stock to increase as market makers hoped the call buying would stop… while instead the next stage of buying caused even more powerful pressure.

(3) January 21st [Strength in Numbers]: Citron Research published a sell recommendation research report on GameStop.  This report drew the ire of the Reddit/WSB community, which bonded tightly as one against “Wall Street”. This retail group understood the pain they could inflict through coordinate levered purchases of both call options and stock. So, they organized to exact maximum pain for the institutional complex with full disregard for what they viewed as elitist backlash.  On January 22nd, call option volumes hit their peak, as you can see in the chart below. 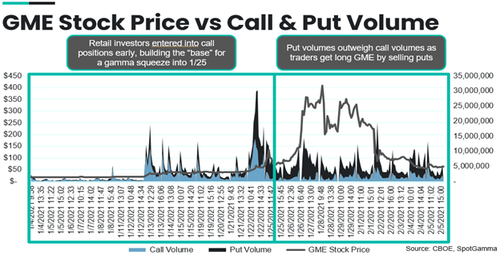 Additionally, this activity displayed in the chart below shows the relative cost of an “at the money option” (an option with a strike equal to GME’s current price).  At the start of January, a trader would pay essentially 5pct of the stock’s price for this option, roughly $1.25 per contract.  As the squeeze began, options prices rose dramatically and that same option cost more than 35pct of the stock’s price for this option, upwards of $75.  This means on both a relative and absolute value, the calls became extremely more expensive. 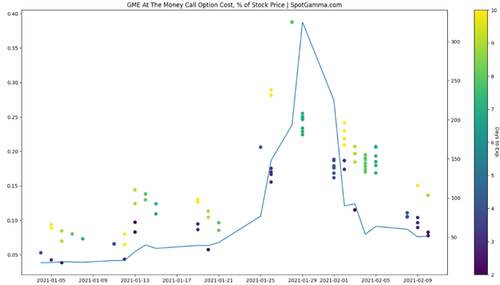 What is equally fascinating, and central to understanding the entirety of the GME trade, is that as these call volumes reached their highs, put options volumes also hit their peak.  As we will explain in Phase 2, we believe this influx of put volumes was key to sustaining the GME stock price and helped fuel the second “super squeeze”.

(4) January 22nd-25th [The First Push, Squeeze #1]: In the days following the Citron research report, retail investors continued to purchase stock and options as a large collective community. They felt more and more emboldened as they made progress in pushing the stock price higher from $50-$60 a share up over $125. Eventually, we saw some large funds that had taken significant losses, including Melvin Capital.  These funds breached their borrowing and leverage capacity and were forced to buy back their short positions on January 25th. Again, at the root of this buying momentum was a squeeze that caused GameStop’s stock price to spike over 200pct higher intraday, which forced options dealers to buy stock at higher prices just to maintain their hedges.  In summary, we saw buying activity driven primarily by call options purchases forcing dealers to buy stock into a short-covering rally during the first gamma squeeze.

(5) January 26th-27th [The Super Squeeze, Squeeze #2]: At this point, we hypothesize that the key buyers shifted from the “retail” sector to “institutional.”  We have dubbed the price action associated with this move as the “Super Squeeze”.

As news broke that Melvin Capital needed a bailout, Reddit/WSB investors felt they were winning.  This became a movement.  Even celebrities began to show their “support” for GameStop which in turn engaged an even larger retail crowd to buy stock.

The next day, following the dramatic intraday 200pct rise and fall of GME on January 25th, it appeared to many as if the squeeze was over.  On a quantitative basis, the initial gamma squeeze seemed to reset and short covering subsided. However, at SpotGamma we observed that the number of put options traded increased sharply. You can see in the chart below that total call open interest (light blue) did not change materially throughout the entire period, despite the stock price moving much higher. However, put interest (dark grey) surged as the stock gained in price. 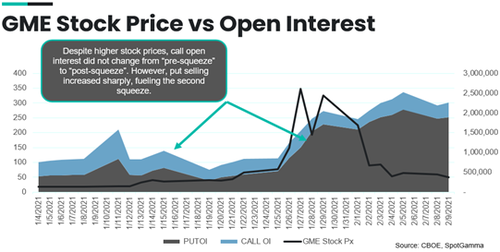 Traditionally when a stock price moves higher traders will often buy puts, and dealers (who are short puts) will short stock as a hedge. However, we believe that that bulk of these put flows were traders SELLING puts. This forced options market makers to accelerate their stock buying hedges.  This activity helped fuel the upward momentum and create the “super squeeze.”  Again, as GME stock price was increasing, the market makers bought hedges and the short sellers bought stock to cover their short positions, thereby creating extraordinary upward pressure.

As a visual representation of this event, the chart below presents a method of valuing the option market maker risk (exposure) caused by these new trades.  The aggregate delta reflects the directional exposure created by all of the GME options trades. Since this figure is extremely positive, it shows that the independent GME options traders profited from moves higher in GME stock. Conversely, it shows how the market makers (who are on the opposite side of these trades) had a large and growing requirement to buy stock to hedge their positions.  Here, we present this on an aggregate basis to illustrate just how much value in stock had to be purchased the morning of January 27th. 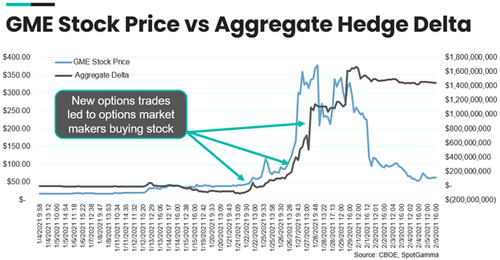 To summarize the reasons for the Super Squeeze, which propelled GameStop shares from $80 per share to over $450, the following events were most impactful:

Phase Three:  Expensive Stock and Options Prices, Coupled with Trading Restrictions, Drove GameStop Price Back Down to $60 Per Share

(6)  January 27th-28th [Expensive and Controlled Dynamics]:  Following this second big push, many traders wondered what would happen next.  Would we see a third leg of this squeeze send GameStop stock price to $700?  The answer we all know now is the trade stalled out, and at SpotGamma, we believe there are three primary reasons:

Reason one: Stock and options were too expensive. At more than $300 per share, the call prices and stock price cost too much in buying power for the retail crowd to continue pushing the stock higher.  The leverage provided by trading firms such as Robinhood maxed out and the support waned, as retail traders were unable to buy more stock, and in some cases, were forced to sell their existing long positions.

Reason two: Hedging requirements declined.  As the stock price stalled, the price of options (measured by the implied volatility) meant the market makers who were long stock no longer needed their positions and could sell them, putting downward pressure on GameStop’s share price.

(7)  January 29th-Feb 4th [Downward Slide]:  With these high prices, new controls, and market interventions, the stock price slide was progressive with a few days of intermittently volatility.  Again, during this period, since options dealers were able to sell the stock they bought as hedges, they eventually pushed the stock steeply lower in a matter of hours.  Eventually, the stock broke back below $100 per share by February 2nd and below $60 per share on February 4th.

GameStop was not the first stock to squeeze higher and it will not be the last.  At SpotGamma, we will consistently and reliably analyze these dynamics across more than 3,500 stocks and indices to bring our subscribers relevant actionable information.  We believe with the significant number of new trading accounts opened following the GameStop drama that this is the beginning of more options volume and there will be significant momentum across the derivatives markets in the years to come.