“Vega Vacuum”: Why The High VIX Has Been So “Persisently Sticky” And What Happens Next

“Vega Vacuum”: Why The High VIX Has Been So “Persisently Sticky” And What Happens Next

While it seems like only yesterday, this week will mark one year since the S&P’s pre-corona crisis high (3386) which as Goldman’s Rocky Fishman reminds us was then followed, less than four weeks later, by the VIX’s all-time high (83).

And while the VIX’s 19.97 close on Friday (it has rebounded back over 20 on Tuesday as a result of what Nomura’s Charlie McElligott said was signs of “crash-UP” chasing from buyers into the Equities call-wing/right-tails “which is in danger of adding to ongoing fragility in the Vol space”) was the first below 20 in almost a year, the VIX remains remarkably sticky and high: consider that a year later the S&P500 is 16% above its Feb-2020 high and 76% above its March low, yet “the volatile year has left a persistent overhang of risk aversion” and as Fishman notes, beyond the first three months of expirations, implied volatility is closer to its risk-averse pre-Election Day levels than to pre-virus levels. 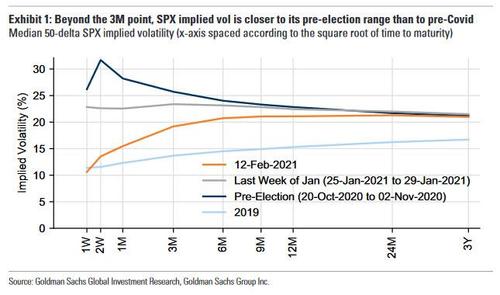 Said otherwise, beyond the first month of maturities, implied volatility has been much more static, so curves are near record levels of steepness, and expectations of volatility 3-6 months in the future are comparable to pre-election levels. In other words, vol risk premium has been persistently high.

Volatility risk premium trended downward across the 2010-2019 inter-crisis period, as option selling strategies consistently grew in popularity, culminating with a record stretch of sub-10 VIX in late 2017, yet which peaked around the 2018 VIX spike when the most popular inverse VIX ETF was wiped out in seconds.

However, everything changed in early 2020 when the outburst of volatility created enough aversion to short volatility strategies to drive vol risk premium (especially if measured via VIX or variance swap levels) to some of the highest sustained levels on record. Indeed, as Goldman calculates, even after falling 13 points in two weeks the VIX is 2 points higher than a regression vs. its most closely matching metric of realized vol would say it should be. 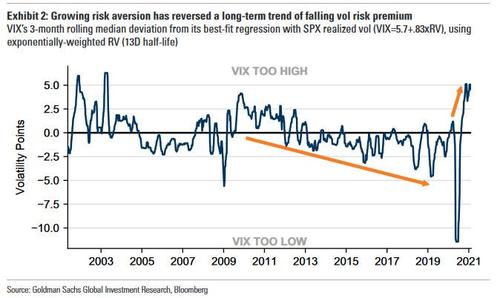 Also notable: the streak of 20+ closes was the longest since the GFC, but the aftermath of the coronavirus-driven VIX spike has seen a faster reversion to lower volatility than the GFC had even thoug hpeak levels of many implied and realized vol metrics exceeded GFC highs, according to Goldman which also notes that low correlation inside the SPX helped 1M realized vol fall to the 10% range in August and December, vs not falling that low until Dec-2009 following the GFC. 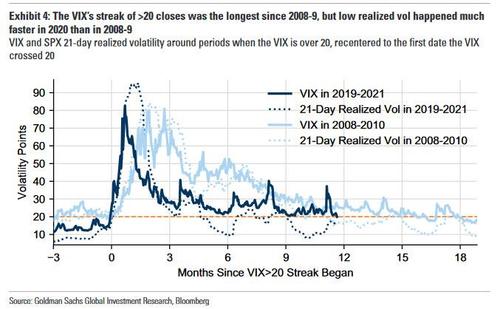 Aside from a psychological reluctance to get burned on another possible VIX spike, what is fundamentally behind this “sticky” high VIX? According to Goldman there are two growing sources of demand, reluctant supply.

Two growing key sources of demand for volatility risk have been the single stock option market (which has started 2021 with even higher volumes than it had in 2H2020), and inflows into long VIX exchange-traded products, particularly the UVXY (1.5x-levered VIX futures ETF). Incidentally, on Friday we discussed an interesting observation from Morgan Stanley according to which retail investors are flooding into long VIX ETP and calls, creating an upside “vega vacuum”, as they may be targeting the vol sector seeking to spark another short squeeze in the VIX.

The bank concluded that “while these flows don’t necessarily mean a spike in volatility is going to repeat itself in the imminent future, as they grow, it does mean that the risks of future volatility squeezes remain elevated”, and concludes that whereas it “continues to like selling volatility to capture what should be a continued wide implied versus realized spread in the coming months… the above positioning dynamic creates a risk.”

Goldman shared its own thoughts on this surge in ETP inflows and demand for Vega:

Long VIX exchange-traded products (ETPs) have started February with over $1bln of net inflows, bringing the complex to its longest net vega position since before the coronavirus crisis began. The 1.5x-levered UVXY ETF is now by far the largest VIX ETP, just as the TVIX was prior to its delisting in June. The recent inflows have returned the VIX ETP market to a size and product distribution that is similar to how it looked prior to the coronavirus crisis, except that the UVXY has replaced the TVIX as the main levered long product. Because it has lower leverage (1.5x for the UVXY vs 2.0x for the TVIX), the UVXY’s rebalancing is significantly smaller at the end of the day than the TVIX’s would be for a given amount of VIX futures exposure (and current rebalancing would be a fraction of the lead-up to the Feb-2018 VIX spike). 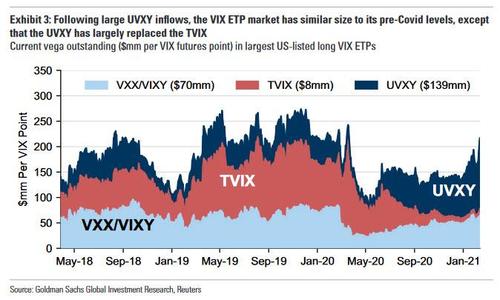 There is another notable difference between Feb 2018 and now: whereas back then retail investors were flooding on the short VIX side, now they are doing the opposite, effectively betting on a VIX spike, a topic we discussed extensively last Friday.

Whatever the cause behind this dramatic inflow into long VIX exchange-traded products, particularly the 1.5x-levered VIX futures ETF UVXY, Fishman notes that “the incremental demand from these products furthers the supply-demand mismatch that has been created by reduced interest in option-selling strategies, leaving a persistently high volatility risk premium.”

As a result of these imbalanced flows, implied correlation “is unusually low for the current high volatility level”, and the VIX futures curve is extremely steep, reflecting the impact of the incremental demand. Touching on the first point, Fihsman explains that “single stock implied volatility has been very high relative to index volatility throughout the coronavirus period, leaving implied correlation lower than it usually is in a volatile environment.” The derivatives strategist expects continued low realized correlation going forward, “as the reopening theme and policy changes have sector-specific impacts.” 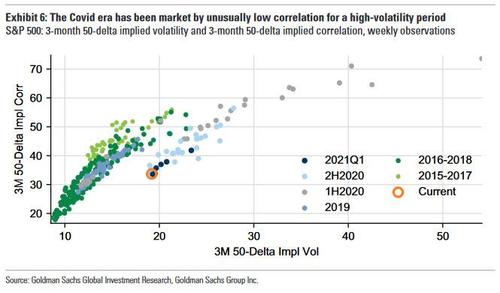 Which leads us to Goldman’s preferred trading themes, which center across: long gamma, short vega.

As the bank explains, “hedging remains expensive, but short-dated puts are better value than they have been for a long time with the VIX dipping under 20. Hedges add value by allowing investors to maintain larger long positions than they would unhedged. Given how steep implied vol curves are, we prefer short-dated puts and put spreads to longer-dated hedges, and see EEMoptions as particularly attractive relative to other indices.” In this, Goldman agrees with Morgan Stanley except for the disclaimer that this whole trade can go haywire if retail inflows into VIX ETPs accelerate, sparking a vol-wide squeeze.

One final trade reco from Fishman is outright vol selling strategies – especially longer-dated – which can be favorably asymmetric:

One final word of caution to anyone wishing to sell vol here. As Nomura’s McElligott warned earlier today, there is another reason – or rather several – why forward vol has been “bid only” for the following demand-over-supply reasons:

Of these, the last one is most remarkable: we may be approaching an August 2020 “gamma meltup” analog where the entire VIX complex surges, not due to SoftBank’s intervention however or easier financial conditions and continued stock upside, but precisely due to them, i.e., aggressive and outsized call buying is now the main catalyst supporting the VIX and may in fact lead to far higher VIX levels in the coming days, an outcome which some may interpret incorrectly as downside protection hedging and create a violent imbalance in the vix complex, leading to just the “market fragility” event that the Nomura quant spent much of his note warning about…