If you are looking for it, there’s always something for equity bulls to worry about. Here is a relatively new item: Analysts who increased their profit forecasts at light speed late last year are dampening their enthusiasm. It started happening this month, so the development is fresh. If it continues, U.S. stocks will have a harder path ahead, strategists at JPMorgan Chase & Co. warn.

The proportion of net analyst upgrades to total changes in earnings estimates reached an all-time high of 42.6% last month but has since slipped to 39.2%, the bank’s data show. That’s despite company announcements that showed a profit recession ended earlier than expected and government data confirming the economy is turning around.

Sell-side analysts, a group not usually known for their moderation, are no longer willing to predict a widening profit rebound — even as most on Wall Street see the turnaround as just getting started. Should this new development morph into a trend, analysts’ skepticism may send a bad message to investors who have pushed stocks to record levels.

“If this is the start of a new trend, then investors may find equities gains first start to fall, and, if net downgrades follow, then there is an increasing probability that equities fall,” JPMorgan strategists including Khuram Chaudhry said in a note. “The risk is small as of today, but the trend suggests Q2 may prove to be more challenging for equity investors than currently perceived.” 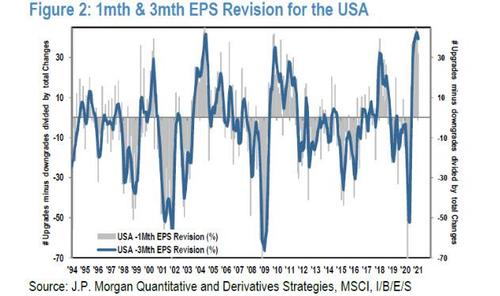 So far this month, financial and energy firms are the only sectors with an improving pace of upgrades, with the rest of the groups seeing a downturn. That’s connected to a broadening reflation trade that’s on display today, with crude and financial firms pushing the broader market higher.

Though it’s very early, the development has already caught the eyes of strategists from RBC Capital Markets, who noted a stalling pace of profit upgrades last week, to Societe Generale SA. That echoes Bloomberg Intelligence’s data, which showed the pace of analysts’ upgrades to first-quarter estimates has stalled this month.

To Andrew Lapthorne, SocGen’s head of quantitative strategy, part of the pullback could be due to analysts’ “usual game of forecasts being cut then beat during report seasons,” he said by email. The brisk pace of upgrades starting late last year wasn’t sustainable, as it left less room for “more upgrades,” he said.

Whether the current moderation is a short-term breather or a longer pullback in estimates, it’s done little to derail bullishness among equity investors, at least so far.