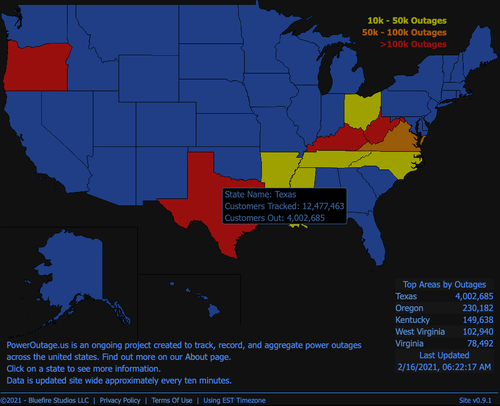 Houston Police Chief Art Acevedo tweeted that a weather-related death was reported Monday night. He said exposure to “extremely low temperatures” was the cause of death.

Very sad about the death of a male subject in our city. Please seek shelter tonight. Temperature is already down to 20 degrees with windchill of 6 degrees. pic.twitter.com/5NSu8Wa155

Acevedo tweeted, “Please pray for our elderly and vulnerable populations tonight. With the 2nd consecutive night of massive power outages and frigid cold, many lives are at risk. State of Texas leaders must do better, lives depend on it.” 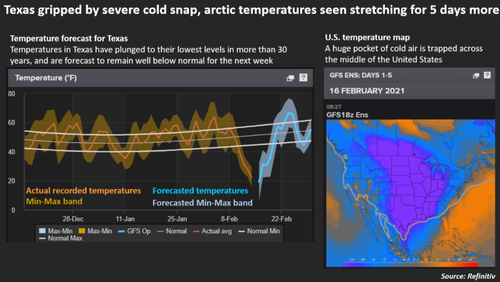 Below-average Texas temperatures will likely clear out by the end of the weekend.

Due to a prolonged power outage at the water treatment plant, Pflugerville is under a boil water notice. We are working with Oncor to restore power, but until further notice, all city water customers must boil their water prior to consumption. (1/3) pic.twitter.com/alhpeSfyaN

Cellular networks started to go offline as “backup generators at towers are freezing or running out of fuel or both,” tweeted County Judge KP George.

Cell phone service is starting to break down over the region as back up generators at towers are freezing or running out of fuel or both.

Increasing outages will be possible overnight.

Governor Greg Abbott wrote on Twitter that “Texas power grid has not been compromised.” However, millions of Texans are unhappy with his response to the grid crisis that has sparked chaos across the state. He deployed National Guard troops to assist the state in relief efforts.

“The additional shed coupled with increased demand will likely increase blackout numbers and times. We should discuss how Texas let this happen. I understand your anger. I’m angry too. But tonight-right now- is about human and animal survival. Check on and help one another!”

President Joe Biden declared an emergency on Monday for the Lone Star State, where temperatures in some areas hovered near zero.

The freeze also took a toll on the state’s energy industry, the country’s largest crude refinery shuttered operations on Monday. Over the weekend, natural gas pipelines had restricted flow as wellheads froze.

… and the worst might not be over as a second winter storm could batter the state by midweek.