It’s been a slow start to the week with much of Asia still closed for the Lunar New Year, and the US Presidents’ Day holiday today, although as DB’s Jim Reid writes “it has been a pretty eventful year so far with riots on Capitol Hill, the Georgia election results and huge associated potential stimulus numbers, the taper debate (becalmed for now), various bubble debates, Bitcoin up nearly five-fold since October, the EC vaccine saga, virus mutations, and who can forget the remarkable Reddit story.”

Still, as Reid adds, “over the last week or two markets have calmed down and returned to the liquidity/ risk on trade” with the DB strategist predicting that it “will be a very strong year for the global economy as I think life will look very different in the summer (even with some restrictions still), with an abundance of pent up demand. However that will likely bring its own issues with bond yields vulnerable if we see summer inflation (even if only transitory) and if the US technology bubble bursts as the “old” economy becomes relatively more attractive again and as day traders/retail have less time to invest in these chosen stocks. Before we get there the upcoming stimulus checks may find their way into equity markets so if there is a bubble it may inflate more first before any correction. So I reiterate that I don’t think this will be a low vol year so enjoy the quiet period ahead while you can.“

But first we have to get through this week, where the main event on the data front, is not until Friday with the next batch of flash PMIs published then. As a reminder, January did see a divergence between the major economies as while a number of composite PMIs were below 50, including the Euro Area, the UK and Japan, the US economy continued to show promising signs, with the composite PMIs rising to the highest level (58.7) since March 2015.

The coming week will also see an increasing amount of hard data releases for January, including retail sales, industrial production, PPI (all Wednesday), housing starts and building permits (both Thursday).

From central banks, the next big round of monetary policy decisions won’t come until mid-March now, but we will get a number of meeting minutes released over the coming week, including from the Federal Reserve (Wednesday), the ECB (Thursday) and the Reserve Bank of Australia. We also get a bunch of Fed speakers. Otherwise, the policy decisions will come from emerging market economies, with Bank Indonesia expected by DB’s economists to cut their policy rate by 25bps on Thursday, and the Central Bank of Turkey also deciding policy that same day.

A full breakdown of economic key events this week is below, courtesy of BofA: 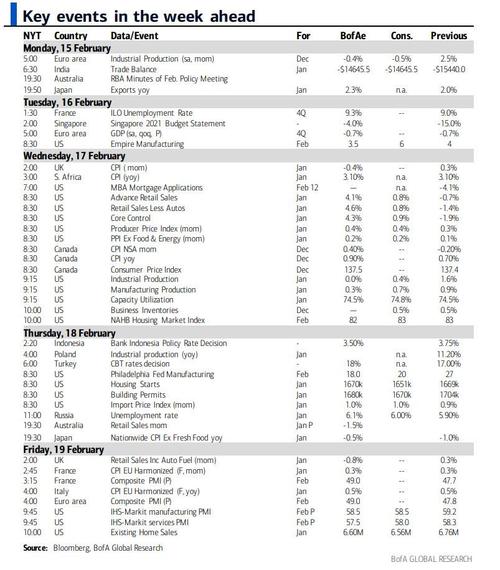 Elsewhere, earnings season is starting to wind down now, with around three-quarters of the S&P 500 having reported. However, the coming week will still see a further 54 in the index report, as well as 67 from the STOXX 600. In terms of the highlights, on Wednesday we’ll hear from Rio Tinto and British American Tobacco, followed by reports on Thursday from Walmart, Nestle, Applied Materials, Airbus, Daimler, Barclays and Credit Suisse. Finally on Friday, releases include Hermes International, Deere & Company, Allianz and NatWest Group.

With the spectacle of the second Trump impeachment officially over, the Senate will now begin to debate the House’s stimulus proposals this week. DB’s economists believe that it is possible that the Senate could move quickly towards a floor vote without making many changes to the House package. However their base case is that it will take a few weeks as moderate Democrats pare back Biden’s $1.9tn package through amendments. Indeed the House Ways and Means Committee last week took some steps to pare back the number of people eligible for stimulus checks, which lowered the cost of that part of the bill by $60bn.

In terms of latest on the virus, the UK PM Johnson confirmed that his government has met its target of immunising everyone who wanted a jab over the age of 70, along with people who live or work in nursing homes, health service workers and those who are most vulnerable to Covid-19. Meanwhile, Japan is set to begin vaccinations on Wednesday with medical personnel being the first ones to receive the shots.

Courtesy of DB, here is a Day-by-day calendar of events

Finally, looking at just the US, Goldman notes that the key economic data releases this week are the retail sales report on Wednesday and the Philadelphia Fed manufacturing index on Thursday. There are numerous speaking engagements from Fed officials this week.