If House Price Increases Of 10% Is Not Inflation. Then What Is it

If House Price Increases Of 10% Is Not Inflation. Then What Is it

Two decades of price mismeasurement and policy confusion have left everyone bewildered and puzzled over inflation. Inaccuracies in inflation measurement are far from being merely academic; it reopens the fundamental issue of inflation and how policymakers should use price information in its conduct of monetary policy.

Inflation – What Is It?

There has not been a general discussion about inflation and how statisticians should measure it in about 25 years. In the mid-1990s, a controversy over the consumer price index (CPI) erupted when Former Federal Chairman Alan Greenspan told Congress that the CPI overstated actual inflation by at least one percentage point. And by using it to index government entitlement programs Congress was over-spending for cost-of-living adjustments and increasing the budget deficit in the process.

Politicians always looking for an easy and quick fix jumped into the debate, calling for the Bureau of Labor Statistics (BLS) to make an immediate change in the CPI measurement. The dispute over measurement issues was not as simple or clear-cut as politicians thought it was. So the Senate created a formal Advisory Commission, under the direction of Micheal Boskin, former Chairman of the Council of Economic Advisors, to study the CPI issue.

The Commission recommended that BLS move the CPI more towards a cost-of-living index (COLI). As constructed, the CPI is a fixed-weighted index measuring price change between two periods. In contrast, a COLI would measure the prices of a comprehensive basket of goods and services that offers the same satisfaction to an average consumer as in the prior period. There is no consensus on what a true COLI is, nor is there a consensus on how such an index would be estimated.

In its final report to the Senate, the Commission made a number of recommendations (e.g., quality changes, product substitution, and new business outlets) that would purportedly lower the CPI index and ignored or overlooked changes that would result in a higher index. In time, BLS incorporated several of the Commission measurement changes and also made a change at the same time in the measurement of owners’ housing costs.

The change in owners’ housing costs had nothing to do with the CPI controversy, but it had a bigger impact on reported inflation. BLS statisticians argued that because of the ever-shrinking supply of owners’ occupied homes available for rent, data adequacy and quality did not meet their standards. BLS decided to link owners’ rent to the rental market even though the two markets were separate.

The change in the measurement of owners’ housing costs was never challenged by the Federal Reserve or politicians, but its impact proved to be far bigger than the changes made by the Boskin’s Commission. In the past two decades, house price inflation has increased twice as fast as the owners’ rent index. And all of the outperformance has occurred during the expansion years, periods when policymakers have been confused why cyclical inflation has not run faster and why inflation seemed to be at times insensitive to changes in monetary policy. 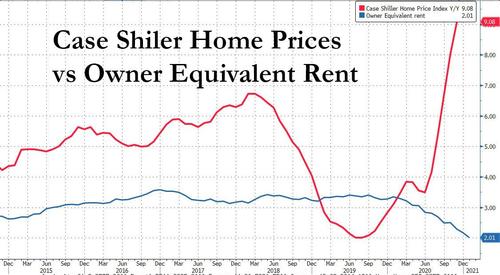 There is an old axiom in price measurement; that is, price indexes measure the rate of price change for the conditions of the index. The appropriate price index for monetary policy is an index based on market prices paid by the consumers (i.e., a buyers index). Excluding the price change for houses (or the implied rents from owners occupied homes) reduces the accuracy of reported inflation.

The Federal Reserve was one of the stakeholder groups that forced a change in the measurement of the CPI. So when it was time to select a price index initially as an informal policy tool, and later as a formal guide, policymakers were in a jam. Could policymakers select the CPI as the preferred index after saying it was flawed? No. In the end, policymakers choose the personal consumption expenditure deflator (PCE) reported by the Bureau of Economic Analysis (BEA) over BLS’s CPI.

The Fed argued that BEA’s PCE index was a superior index. It’s not. First, BEA does not measure consumer prices. That’s the responsibility of BLS. The only direct measure of prices that consumers pay for is the CPI. Second, BEA uses the CPI data for 70% of the PCE index. Third, the remaining 30% of the PCE index is for goods and services that businesses and the government provide or give to people. That creates a price measurement problem since these items are not “sold” to the consumer and should disqualify it as the appropriate price index for monetary policy since it is not based solely on market prices paid by the consumer.

Confusion over inflation and the appropriate measure of inflation has left policymakers adrift. Instead of acknowledging the errors in price measurement and the selection of the wrong price index, policymakers have doubled-down. They remain hell-bent on hitting a 2% inflation target with a flawed index and have introduced inflation-averaging as a new policy tool. Inflation-averaging doesn’t eliminate the flaws of price mismeasurement; it compounds them. In other words, a “donkey-indicator” is still a donkey after averaging!

Several analysts have raised concerns that the recent explosion in the broad money supply is a harbinger of higher inflation. Similar comments on inflation were made nearly a decade ago when the Federal Reserve introduced quantitative easing.

During the early years of quantitative easing (almost ten years ago), I made a bet that reported inflation could never rise above 5% again based on price measurement issues with Alliance Bernstein colleague Cathy Wood, who is the founder, CEO, and CIO of ARK Investments. I have never collected on that bet. And I would make the same bet today based on the construction of the price indexes. 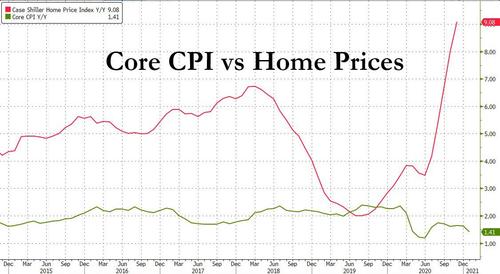 In a speech titled “Problems With Price Measurement,” Former Chairman Alan Greenspan stated, “policymakers should be cognizant of the shortcomings of our published price indexes to avoid actions on inaccurate premises that will provoke undesired consequences.”

Inflation can destabilize an economy even if faulty price indexes fail to reveal it. It already happened during the house price bubble of 2007-2009. Odds are high it will happen again because policy confusion over inflation lives on, evident by the current policy framework built upon the false premise that a single price index can identify economy-wide price imbalances. In the past two decades, reported inflation has veered off as a useful and accurate barometer of what prices matter. A flexible policy approach is needed because prices that matter nowadays have shifted from the goods and services markets to the asset markets.