Anthony Fauci is pushing for Congress to pass the next round of stimulus in order for schools to ‘safely reopen.’ 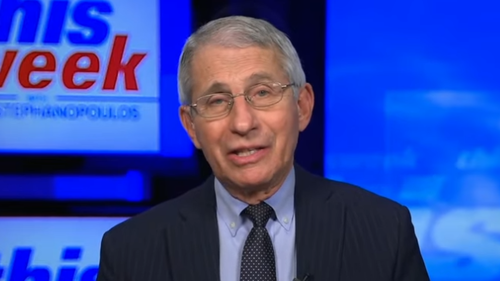 “It’s the first time that it’s been put down in a document based on scientific observations and data over the last several months to a year, both in the United States and elsewhere. Part of that is to indicate and to suggest strongly that a preference be given to teachers to get vaccinated,” Fauci said, though he suggested that schools could reopen without having all teachers vaccinated beforehand.

“Obviously it’s not a perfect situation, but it’s really important to get the children back to school in the safest way possible.” https://t.co/AsaBejuXu6 pic.twitter.com/INndliCji3

As The Hill notes, Fauci’s comments expanded on new guidelines recently released by the Centers for Disease Control and Prevention (CDC) – which Director Rochelle Walensky admitted on Friday were dictated in part by lobbying groups – which, need we remind anyone, are not ‘the science.’

Who else helped draft the recommendations? Donna Harris-Aikens, who came to DOE last month after 14 years as a Senior Policy Director at the NEA.

So, special interest groups are demanding more ‘protection’ for teachers, and Fauci is now urging Congress to pass the next round of stimulus in order to reopen ‘safely.’

What’s more, even after everyone is vaccinated, Walensky says the CDC still might not recommend reopening schools full-time, and that there may be some “combination of mitigation strategies” instead.

One last unbelievable note from this press conf: @CDCDirector said that even after everyone is vaccinated, CDC still might not recommend school open normally 😯 According to her, even then, we might need “some combination of mitigation strategies.”

Fauci – who told ABC that he doesn’t think schools have the resources available to abide by the new CDC guidelines.

House committees have begun marking up portions of President Biden‘s $1.9 trillion stimulus plan, and Democrats have vowed to pass a final bill into law by early next month.

However, Fauci on Sunday appeared to be optimistic about reopening schools, a move that he has been supportive of throughout the pandemic, arguing the detriment to young students was too great.

“I think it can be done. I mean, obviously it’s not a perfect situation, but it’s really important to get the children back to school in a safest way as possible. Safe for the children, but also safe for the teachers and the other educators,” Fauci said. -The Hill

The CDC, in its new guidelines, said that it’s “critical for schools to open as safely and as soon as possible,” due to the benefits of in-person learning as well as negative effects on mental health and academic performance based on data from last year.