There are widespread reports emerging Monday out of Myanmar that military and police are using increasingly harsh and potentially deadly tactics to quash anti-coup protests there.

Despite a near total internet and telecommunications outage across the country social media videos are being posted of large-scale troop and armored vehicle deployments to the streets. Chaotic scenes of blasts and flash-bangs show anti-riot tactics deployed on crowds, but also suggest ‘live fire’ could be happening – though there’s still conflicting reports over whether security forces are using live ammo or rubber bullets.

Myanmar’s junta cuts the nation’s internet and deploys extra troops around the country as fears built of a widespread crackdown on anti-coup protests, but defiant demonstrators again take to the streets https://t.co/8XxzFZ0Fjt pic.twitter.com/tpCWAQE1HH

“Armored vehicles have rolled into Myanmar cities amid fears of a crackdown on anti-coup protesters after nine days of mass demonstrations demanding a return to civilian rule,” Al Jazeera reported Sunday of the worsening situation.

And on Monday the Associated Press reports that security forces have been seen aiming rifles at groups of protesters:

“More than 1,000 protesters were rallying in front of the Myanmar Economic Bank in Mandalay, the country’s second-largest city, when at least 10 trucks full of soldiers and police arrived and started firing slingshots toward the protesters before they even got out of the trucks, according to a photographer who witnessed the events.

The soldiers and police then attacked the protesters with sticks and slingshots, and police could be seen aiming long guns into the air amid sounds that resembled gunfire. Local media reported that rubber bullets were also fired into the crowd, and that a few people were injured.

Police were also seen pointing guns toward the protesters.”

This @IrrawaddyNews photo going viral in #Myanmar from the violent crackdown on protest in Mandalay this afternoon. Plainclothes soldier carrying an air rifle. Footage also shows him pointing it towards the upper levels of a building in the street.#WhatsHappeningInMyanmar pic.twitter.com/pN2LQR7dMd

Scenes like the below are ubiquitous on social media, showing armored troop carriers blocking city streets. 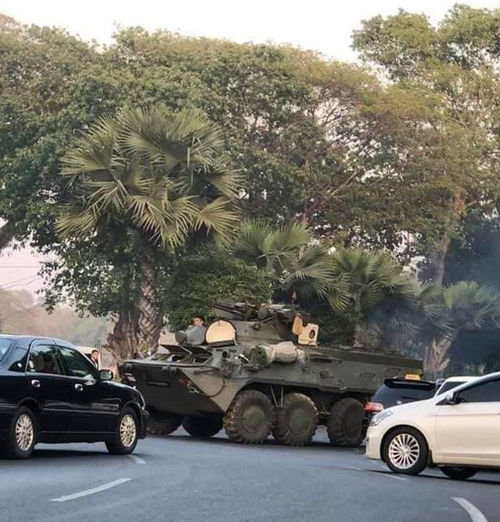 Currently there’s been a handful of critical injuries among protesters wounded by rubber bullets and tear gas canisters, including one woman hit in the head by a projectile who doctors said is not expected to recover.

“Security forces opened fire to disperse protesters outside one plant in Myitkyina, capital of Kachin state, footage aired live on Facebook showed, although it was not clear if they were using rubber bullets or live fire,” Al Jazeera described Sunday.

By all appearances the protesters are getting bolder in their tactics, which is likely to provoke a fiercer response from security forces.

Some people telling me from #Yangon #Myanmar that places allegedly set on fire. Video sent to me is a golf course at Star City being deliberately set on fire they say. Neighborhood slightly upper class with some foreigners living there #WhatIsHappeningInMyanmar pic.twitter.com/e1gsWy6vYP

Last Friday the junta declared it illegal to use “incorrect words” such as coup when referring to the new government, according to a Ministry of Information announcement.

Protesters in Myanmar keep up demands for the release of ousted civilian leader Aung San Suu Kyi and an end to military rule despite the deployment of military vehicles and more soldiers on the streets https://t.co/qxeFDrnCfB #WhatsHappeningInMyanmar #Coup15Feb pic.twitter.com/Ett1FMyzkG

The message further claimed the newly issued one year ‘state of emergency’ is “in accordance” with the constitution.

The United States among other nations recently formally declared it recognizes that a coup d’état has occurred, which began Feb. 1 with the arrest of Aung San Suu Kyi and other civilian leaders.