While Beijing may already be engineering “super soldiers” through biological advancements, it’s unclear how far Chinese military researchers have gone. But what we do know is that the Chinese military has already deployed exoskeleton suits for troops along the heavily disputed Sino-Indian border.

In recent months, China has used top-secret weapons along the Ladakh Line of Actual Control (LAC), such as microwave weapons against Indian troops. Perhaps the heavily disputed border is a testing ground for the People’s Liberation Army (PLA).

According to RT News, citing a state broadcaster CCTV report, PLA soldiers were seen with exoskeleton suits that enabled them to complete challenging tasks in high altitude environments around Ngari, located in Southwest China’s Tibet Autonomous Region. These troops delivered much-needed supplies to border guards along the LAC during the Chinese New Year holiday. 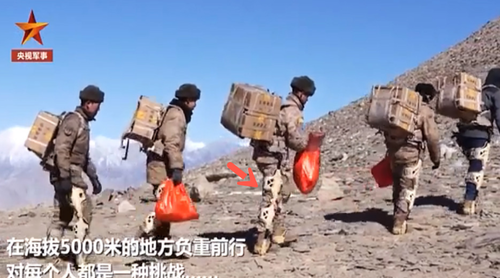 CCTV did not disclose much more information about the exoskeleton developer or endurance of the suit. In the past, China has displayed other types of exoskeletons that are battery-powered and allow PLA troops to carry upwards of 170 pounds.

The PLA has gone all-in to develop “super soldiers” as the US Army is not far behind with their “Ironman-like” soldier exoskeleton suit.

Bank of America’s equity strategist Haim Israel recently told clients of the increasing geopolitical tensions between the US and China and how it would likely flourish through the 2020s.

More or less, exoskeleton suits for the modern battlefield are no longer science fiction as both of the world’s superpowers are racing to deploy the suits ahead of the next conflict.