For the past two months we have been especially constructive on the uranium sector (and its handful of beaten down stocks), which we believe are set to benefit tremendously as the sector gets swept up in the ESG euphoria. Some of our recent observations can be found at the following links:

Then, as uranium stocks did move significantly higher in recent weeks as investors rekindled their love affair with a sector that had been left for dead for much of the past decade, at the start of February an TD Securities analyst said that the reddit short squeeze crowd had started to buy into the sector as well, shortly after a BofA analyst laid out an even more bullish fundamental case, on the assumption that the US could delay the closure of its aging nuclear fleet, boosting demand over the next few decades.

Whether those two bullish takes are accurate remains to be seen, but the recent surge in Uranium stocks accelerated last week after Cameco smashed Q4 estimates and provided a positive sector outlook. The bullsh case was further bolstered by a lengthy tweetstorm by former iconic hedge fund manager Hugh Hendry who said “A lot of you are invested in uranium. I commend you. I wish I was. Uranium is the rockstar of commodities. It doesn’t mess around – bull and bear markets are of epic proportions.”

A lot of you are invested in uranium. I commend you. I wish I was.

Uranium is the rockstar of commodities. It doesn’t mess around – bull and bear markets are of epic proportions.

I don’t know the catalyst for why such stocks are exploding higher this week except that the stock market had been sending positive vibes for a while now – an emerging trend is evident.

… our readers have once again been way ahead of the curve on this dramatic move higher, as we have previously repeatedly laid out the bullish case for uranium stocks in general, and Cameco (CCJ) – which controls the world’s largest high-grade uranium reserves and low-cost operations and is one of the largest global providers of the uranium fuel – in particular (here, here, here and here).

And now, another iconic hedge fund manager has jumped on the uranium bandwagon.

In a tweet from Michael “the Big Short” Burry (who communicates with the outside world almost exclusively by twitter with tweets that are spontaneously deleted after a few days), the hedge fund manager who recently made a killing on his Gamestop long, said that “If the government is going to spend $2 trillion, there is no better use than converting the US to nuclear.  Dems can do it! Jobs +”potentially limitless electricity…no greenhouse gas emissions” #greenfuture NOW!”

If the government is going to spend $2 trillion, there is no better use than converting the US to nuclear. @SpeakerPelosi @SenSchumer @POTUS – #Dems can do it! Jobs +”potentially limitless electricity…no greenhouse gas emissions” #greenfuture NOW!https://t.co/rJ1es8jXTh

As for who would get to benefit from such a nuclear transformation?  Why uranium of course… 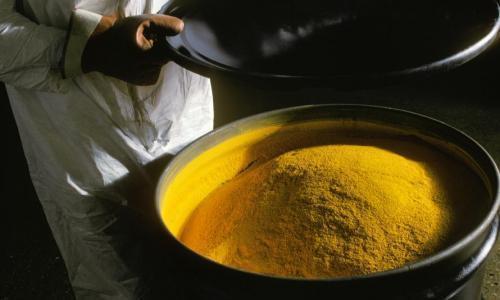 … and the handful of uranium names that still are trading at depressed valuations, although judging by the recent surge in uranium stock prices, the market is starting to sense which way the wind is blowing. Needless to say, a commitment by the Biden admin to nuclear energy, would result in further massive outperformance for the sector.

Look for some substantial uranium exposure in Scion Asset Management’s latest 13F (Burry’s hedge fund) when it is published this week.

Finally, for those who think the uranium rally may be fizzling, here are some of the latest observations from Larry McDonald’s BearTraps Report on why the recent 50% surge higher could be just the start:

Environmentalists hate nuclear yes but they hate thermal coal more, and right now we have 3B people on Earth addicted to coal (India – China). Not to mention Japan!

China loves the idea of producing alt energy for the US using cheap coal. They grow, our energy becomes more expensive. However, we could be slowly giving up our energy independence to be dependent upon a communist country to export to us. Micro nuclear is the answer but environmentalists and the “not in my backyard” crowd don’t want it for the time being. Meanwhile, Lake Norman north of Charlotte is the result of damning a river for nuclear. Same with Lake Anna in VA. Huge recreational potential. Yet, San Onofre in CA was shutdown. SO’s GA nuclear project has huge cost overruns.

Nuclear is so much better for the environment but the two major issues environmentalists site as problems is discharged cooling water than harms fish due to warmer temp and micro leaks that go undetected. How to dispose of contamination is an issue too. I believe all these things have been addressed in the last couple decades and micronuclear sites are a way to limit fallout concerns, albeit extremely low. However, Japan didn’t do proponents of nuclear any favor and hard to ensure total safety when the Earth can move below you… 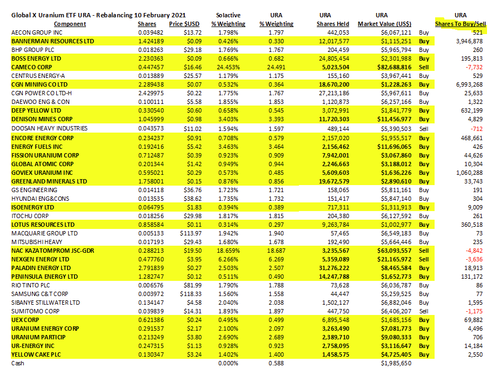 We have the U.cn premium marked at about 3% right now, using Numerco mid spot price

Premium to NAV is continuing. we have long said it should trade at a premium given the issues with trading spot uranium and how attractive it is to gain direct exposure to the spot commodity with a history of making huge moves. Any day now we should see the trust selling more shares and using the proceeds to add to their holdings. This will sequester more material from the market, thus creating a reflexive catalyst that could feed on itself for awhile.