Flaw Of Large Numbers: Cathie Wood’s ARK Invest Risks Having Too Much Cash

Flaw Of Large Numbers: Cathie Wood’s ARK Invest Risks Having Too Much Cash

We were one of the first to highlight how the law of large numbers could eventually stand in the way of Cathie Wood’s success at ARK Invest.

Her firm has added $7 billion in assets in February, topping the $8 billion she added in January. That brings her total ETF assets to a stunning $58 billion.

The problem is that the amount of cash she has amassed is so large, she’s actually running out of companies to invest in. Wood’s funds invest in niche names that deal in sectors like genomics and robotics and, for now at least, the potential investments are relatively limited. ARK already “owns 10% or more of at least 24 companies,” Bloomberg noted over the weekend.

The problem is literally that there’s too much money.

James Pillow, managing director at Moors & Cabot Inc., said: “There is risk with so much money flowing into so few. When the flows stop, or worse yet reverse, one should expect a day of reckoning.”

In addition to concentration risk, which could eventually cause a feedback loop at any point when Ark decides to sell in names and sectors that it is heavily weighted in, ARK must now find new places to put cash to work.

The Janus Twenty mutual fund has similar issues in the 1990s, Bloomberg notes. It rose more than 500% in size over the decade and had $38 billion under management at one point. It plunged 50% during the dot com bubble and then had an “evenly paced” recovery. 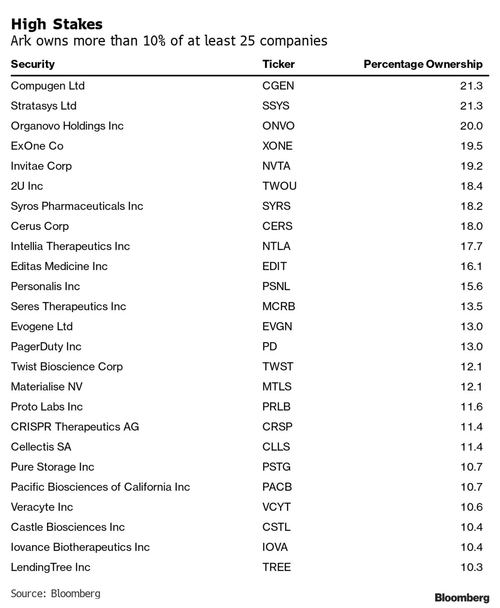 That fund’s former manager, Scott Schoelzel, said recently of Wood: “Probably the one thing she is going to have to figure out a way to navigate is size. I don’t know if it’s $50 billion or $70 billion or $100 billion or $150 billion, but there will be a point where size will become her enemy.”

Wood fired back during a webinar this week, claiming companies she invests in can scale quickly: “When people say, ‘oh, they’re forced into larger-cap stocks,’ well, I can give you a few examples.” She pointed out Invitae, which grew from “roughly $250 million, if I’m not mistaken, to $8 billion.”

All 5 of ARK’s actively managed products have returned more than 100% over the past year. The ARKK ETF is up 164% in the last 12 months alone, far outpacing the 43% rise in the QQQ. 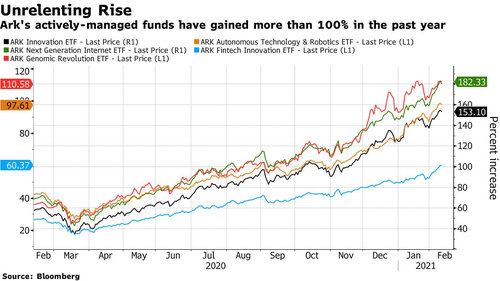 We posited yesterday that perhaps Wood was getting so much investor attention because she is constantly a topic of discussion in financial media. Several people yesterday responded, with one noting that the entire basis for all of Wood’s recent fame and fortune is still due to what appeared to be someone manipulating the options market in Tesla for a year:

World’s worst company sees valuation skyrocket due to what appears to be an organized 18 month gamma squeeze and all of a sudden this woman is hailed as Buffett 2.0 for the tech age. The whole thing is hilarious, and very sad

But we digress. And what goes up always comes down.

Ross Mayfield, investment strategy analyst at Baird, concluded: “I’m sure Ark is happy to have the assets, but at the same time, if you look at the history of chasing hot active-managers in the mutual fund or hedge fund space there’s a lot of mean reversion, and lot of time that happens after big inflows.”

We noted several weeks ago that short interest in ARK funds had “exploded” after ARK’s banner 2020. Short interest as a percentage of shares outstanding for the firm’s flagship $21 billion ARK Innovation ETF spiked to an all time high of 1.9% from just 0.3% two months ago, according to data from IHS Markit Ltd. and Bloomberg.

Shorts were also piling into the firm’s other ETFs, including its $9.4 billion Genomic Revolution ETF and its $5.9 billion Ark Next Generation ETF. ARKK rose almost 150% in 2020 and brought in $9.6 billion in new money. So far, they have been unsuccessful. 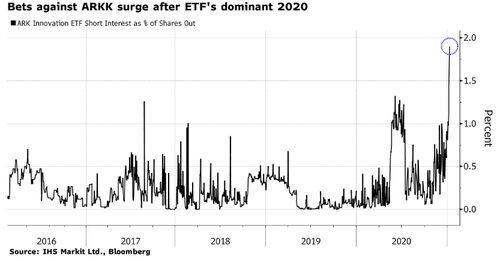 Dave Nadig of ETF Trends told Bloomberg: “You can’t expect any shortable asset to have the kind of meteoric rise ARKK has had and not attract almost mechanical short-selling. There are, quite literally, traders who have screens for ‘ETFs that went up X far over Y time’ to use as contrarian short indicators.”

ETF expert Eric Blachunas commented at the time: “The Ark phenomenon is the first time ever that a rock-star portfolio manager has been shortable. Typically, they’re in a mutual fund or a hedge fund, which you can’t short. This is breaking new ground in a way.”

In late December 2020, Cathie Wood entered into an agreement with Resolute Investment Managers that will allow her to remain the firm’s majority shareholder. The firm is going to retain Resolute’s distribution services as part of the deal. Wood purchased the option for an undisclosed sum and it was financed through a “multi-tranche term loan financing facility provided by Eldridge Corporate Funding LLC,” according to Bloomberg.

Recall, late last year we published a report highlighting Balchunas’ take on how ARK Funds could wind up becoming victims of their own success.