There is a growing consensus in Washington the only way to fix the worst economic downturn in more than 70 years is by giving out more free money.  From Joe Biden, to Janet Yellen, to most members of Congress, there is a demand for more “stimulus.”  However, the reason the previous programs failed is the stimulus doesn’t lead to organic growth.

“Suppose Congress passes something close to Biden’s Administration stimulus proposal of $1.9 trillion. In that case, that will lift the cumulative amount of fiscal stimulus in the past 12 months to $5 trillion—three tranches $2.2 trillion, $900 billion, and $1.9 trillion.

In the past year, nominal GDP totaled $21 trillion, so the cumulative injection of fiscal stimulus amounts to almost 25%.

Nothing in modern times comes close, especially during peace times. CBO published a report in 2010 on the military costs of significant wars. The military war costs of World War 1 amounted to 13.6% of GDP and World War 11 35.8%—-so the current spending/stimulus is in the middle of the two World Wars.” 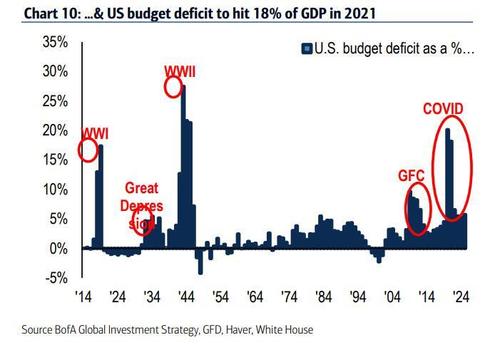 It is an incredible amount of intervention relative to the underlying crisis. As Joseph pointed out, there is a significant difference between today and WWII.

“During World Wars, activity in the private sector is depressed. That’s not the case today. The housing sector is booming, with housing starts at the highest levels in 15 years, and prices are rising double-digit to record levels. At the same time, the manufacturing sector is experiencing a mini-boom in orders and production.”

However, to understand why more stimulus may not create economic growth, we need to review how we got here.

In March, as the economy shut down due to the pandemic, the Federal Reserve leaped into action to flood the system with liquidity. At the same time, Congress passed a massive $2.2 trillion fiscal stimulus bill that expanded Unemployment Benefits and sent checks directly to households. Then in December, the Trump administration hit the economy with another $900 billion. Now, the Biden administration anticipates repeating that with another $1.9 trillion. As shown below, with money pouring into households’ hands, it is not surprising the economy rebounded. 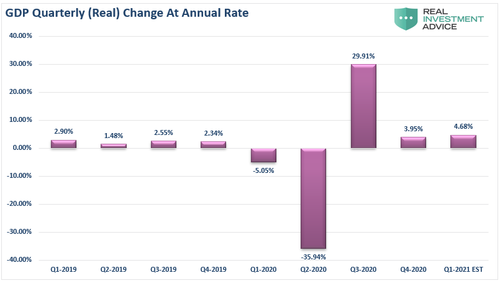 That surge in the third quarter, and surging stock market to boot, directly responded to both the fiscal and monetary stimulus supplied. The chart below adds the percentage change in Federal expenditures to the chart for comparison. 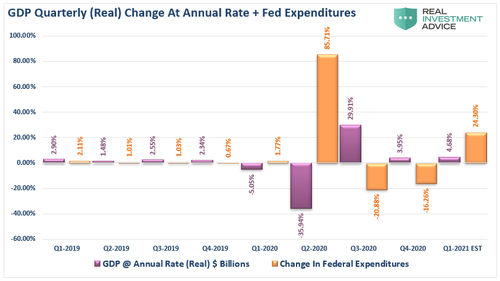 Importantly, note that the rate of change in spending is declining along with economic growth rates. That is the “second-derivative” effect of growth.

The next chart shows how the “second derivative” is already undermining both fiscal and monetary stimulus. Using actual data going back to the Q1-2019, Federal Expenditures remained relatively stable through Q1-2020, along with real economic growth. However, from Q2 through Q4-2020, Federal Expenditures surged. However, the economy still hasn’t returned to positive growth. 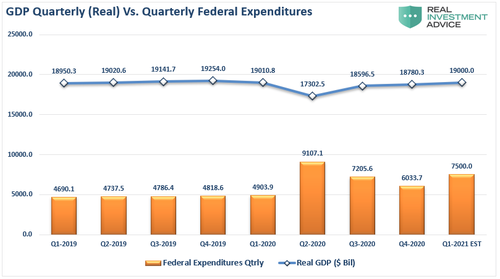 The chart below shows the inherent problem. While the additional fiscal stimulus did help stave off a more in-depth economic contraction, its impact becomes less over time. 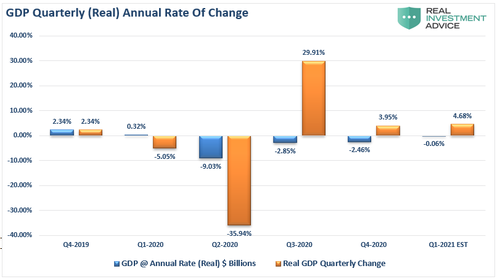 However, this is ultimately the problem with all debt-supported fiscal and monetary programs.

The problem with monetary interventions, like direct checks to households, is that while it may provide a short-term bump in spending, it does not promote confidence. As shown in the chart below, despite a surging recovery in the economy and the stock market, consumer confidence remains mired at recessionary lows. 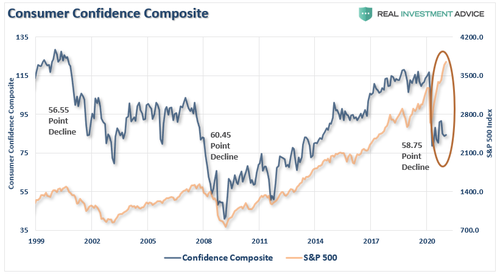 The reason that stimulus payments didn’t improve consumer confidence is due to the understanding that such payments are a one-time benefit. What increases economic prosperity and confidence are employment and wage growth.

Such is the problem with artificial stimulus. To increase employment and wages, it is the confidence of employers that needs to improve. The chart below replicates how the economy works. Individuals must produce first before they can consume. 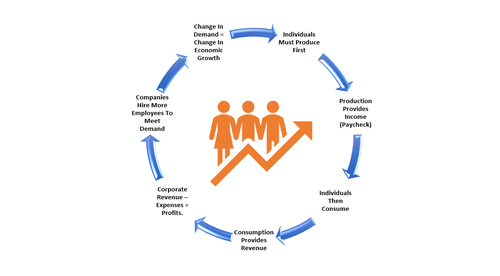 While stimulus will bypass the “production” part of the equation creating short-term demand, such does not create the repeatable demand necessary for businesses to increase employment. We saw this in the recent National Federation Of Independent Business (NFIB) survey.

“Small businesses are susceptible to economic downturns and don’t have access to public markets for debt or secondary offerings. As such, they tend to focus heavily on operating efficiencies and profitability.

If businesses were expecting a massive surge in ‘pent up’ demand, they would be doing several things to prepare for it. Such includes planning to increase capital expenditures to meet expected demand. Unfortunately, those expectations peaked in 2018 and are lower again.” 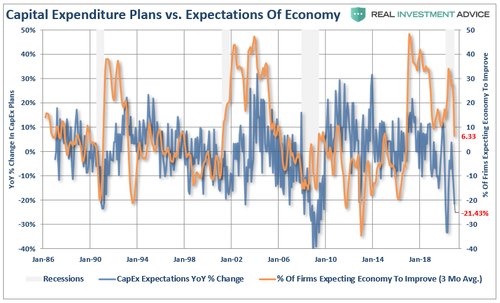 “There are important implications to the economy since ‘business investment’ is a GDP calculation component. Small business capital expenditure ‘plans’ have a high correlation with real gross private investment. The plunge in ‘CapEx’ expectations suggests business investment will drop sharply next month.” 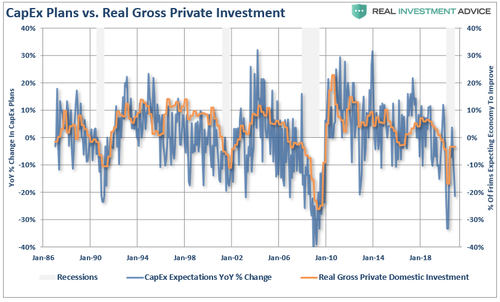 The bigger problem with the stimulus is that it is based on increasing debt levels to provide it.

You Can’t Use Debt To Create Growth.

The biggest problem with more stimulus is the increase in the debt required to fund it. As discussed previously, there is no historical precedent, anywhere globally, that shows increased debt levels lead to more robust rates of economic growth or prosperity. Since 1980, the overall increase in debt has surged to levels that currently usurp the entirety of economic growth. With economic growth rates now at the lowest levels on record, the change in debt continues to divert more tax dollars away from productive investments into the service of debt and social welfare. 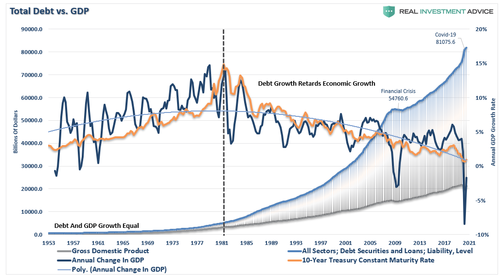 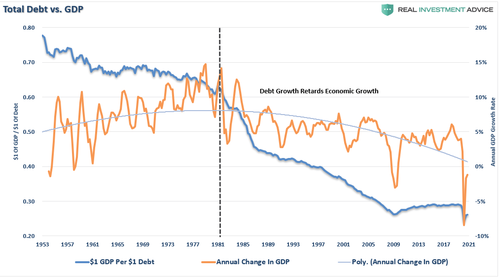 For the 30 years from 1952 to 1982, the economic surplus fostered a rising economic growth rate, which averaged roughly 8% during that period. Such is why the Federal Reserve has found itself in a “liquidity trap.”

Interest rates MUST remain low, and debt MUST grow faster than the economy, just to keep the economy from stalling out.

The deterioration of economic growth is seen more clearly in the chart below.

However, following the 2008 recession, the growth rate dropped to the exponential growth trend of roughly 2.2%. Unfortunately, instead of reducing outstanding debt problems, the Federal Reserve engaged in policies that expanded unproductive debt and leverage. 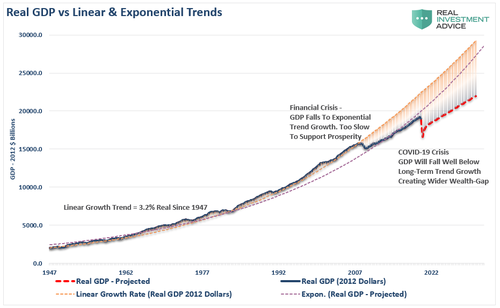 Coming out of the 2020 recession, the economic trend of growth will be somewhere between 1.5% and 1.75%. Given the amount of debt added to the overall system, the ongoing debt service will continue to retard economic growth.

As noted by Zerohedge, the permanent loss in output in the U.S. was shown by BofA previously. The bank laid out the pre-COVID trend growth and compared it to its base case recovery.

Such aligns closely with our analysis shown above. Given the permanent loss in output and rising unproductive debt levels, the recovery will be slower and more protracted than those hoping for a “V-shaped” recovery. The “Nike Swoosh,” while more realistic, might be overly optimistic as well.

However, this is the most critical point.

The U.S. economy will never return to either its long-term linear or exponential growth trends.

A Continuation Of Boom/Bust Cycles

The Keynesian view that “more money in people’s pockets” will drive up consumer spending, with a boost to GDP being the result, has been wrong. It hasn’t happened in 40-years.

“Given the scale of fiscal stimulus, one would expect the Fed to be thinking of “leaning against the wind.” But not this Fed–the Fed is using the same playbook from the Great Financial Recession, providing unneeded stimulus to the red-hot housing market.

What’s the economic and financial endgame? It’s hard to see anything but a ‘boom-bust’ scenario playing out with fast growth and rising market interest rates in 2021 and early 2022, followed by a bust in late 2022/23 when the fiscal stimulus/support dries up.

The US experienced mild recessions following the sharp drop in government military spending after the Korean and Vietnam wars—-and back then, the scale of military expenditures amounted between 2% and 4% of GDP. The ‘sugar-high’ today is unprecedented, raising the odds of a harder landing.

Yes, we will get a short-term burst of inflation and interest rates, most certainly. However, such will quickly collide headlong into the massive debt levels overhanging the economy.

Such is the trap that will put the Federal Reserve in a box of hiking rates and reducing monetary accommodation at precisely the wrong time.

But that is a topic we will discuss next week.