On Tuesday, Boston Dynamics uploaded a video of Spot, the autonomous robot dog designed to inspect hazardous job sites, with a new trick. The robot dog has been programmed to self-charge, allowing it to replenish its batteries without humans’ help.

In recent months, an industrial version of Spot has been deployed to an oil rig, a Ford Motor Company factory, and even at the Chernobyl Nuclear Power Plant, conducting tasks that humans would normally complete. But during those deployments, human intervention was needed with the robot to replace batteries.

The upgraded version of industrial Spot with self-charging capabilities allows it to operate in dangerous areas for longer while mitigating health risks to humans.

The robot has a vast amount of inspection capabilities, including visual inspection, gauge reading, thermal sensing, leak detection, and laser scanning. Usually, these tasks would be completed by humans, but not anymore. 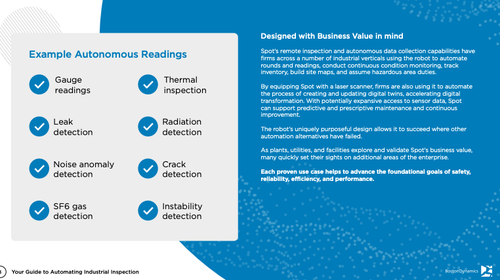 According to Engadget, more than 400 Spots have been sold since June. Boston Dynamics is only selling the robot to corporations.

It appears Spot is getting better at doing human jobs. That’s great for productivity but will have profound implications down the line for the labor force.

By the end of the decade, automation and artificial intelligence could displace tens of millions of jobs – this trend has been thrown into hyperdrive since the virus pandemic. Lawmakers have to see the downside to the robot revolution, that is, one where income inequality will continue to expand.

The great displacement is underway – if you’re a reader and work in an industry that could be highly disruptive due to automation, such as working in a warehouse – maybe now is the time for job retraining.