On Thursday we noted that the biggest winners from the upcoming $1.9 trillion stimulus would be a family of four making up to $150,000 per year, which would entitle them to $12,800 in federal income support over the next 15 months. 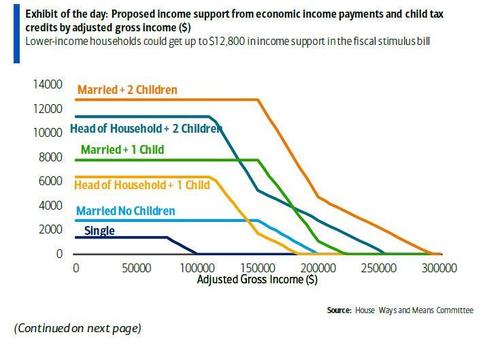 Part of this is of course the $1,400 (not $2,000) in direct payments – which just cleared a key hurdle on Thursday when the House Ways and Means Committee passed legislation which also included tax credits for children that will be sent to households on a monthly basis, according to Bloomberg.

“The $600 rebates that Congress delivered in December didn’t do enough,” said Rep. Suzan DelBene (D-WA) during the Ways and Means Committee debate on Thursday. “This is critical relief to help families weather this crisis.”

The measures, which passed along party lines 24-18, were just one component of different elements of the Biden stimulus, while eleven other House committees are working on their own measures for the package which are slated for completion on Friday – with the full house voting the week of Feb. 22 on the overall package. 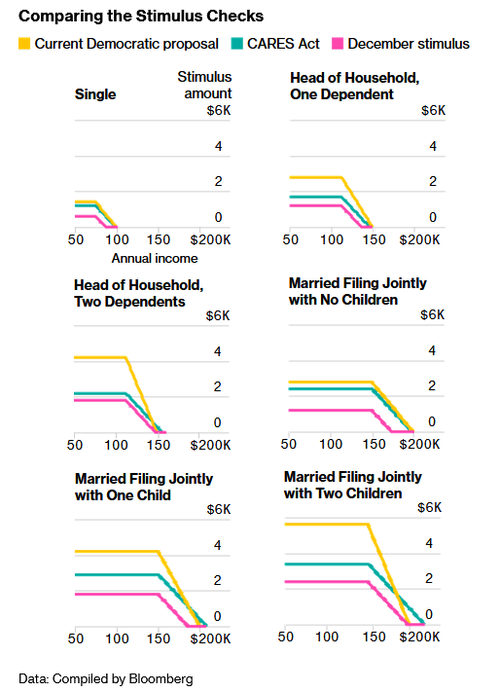 Meanwhile, low-income workers and families footing the bill for childcare or adult care will receive expanded tax credits, while benefits for health care and paid sick leave will also receive a boost, along with employers – who will receive extended incentives to keep workers employed.

Democrats say the payments are critical to help bolster household income amid the elevated unemployment rate and additional costs burdening American families. Republicans have criticized the proposal, saying it includes many items Democrats have championed before the pandemic and that many higher-income households that aren’t struggling would benefit.

The Internal Revenue Service is planning to issue the stimulus payments as quickly as possible if the legislation is signed into law.

Households would get the child tax credit in the form of a $300 a month payment for children five and under or $250 a month for those six and older starting in July. That amounts to a $3,600 benefit for younger children or $3,000 for older ones — an increase from the current $2,000 maximum credit. The tax break is currently paid out as a tax refund, rather than in monthly payments. –Bloomberg

Households making up to $91,000 per year will receive approximately two-thirds of the benefits, according to the Urban-Brookings Tax Policy Center, while around 11% would go to the top 20% of taxpayers – those making $164,000 or more.

In addition, multi-employer pension plans on the verge of collapse would be bailed out under the House-approved legislation – allowing for insolvent plans which have collective bargaining agreements to obtain loans in order to maintain distributions.

Single-employer pensions, meanwhile, will receive more time to make up losses – and will receive a few new loopholes to calculate their liabilities, “which are inflated while interest rates remain low,” according to the report.