It appears that there’s such a thing as pumping a worthless stock too far.

Today the SEC made it clear that it won’t sit idly by as millions of daytraders gang up and pump pennystocks to the moon after it announced it would bar trading in SpectraScience , a Minnesota healthcare company, the FT reported. The suspension comes as new and inexperienced retail traders have flooded into the market drawing scrutiny from policymakers in Washington.

In addition to launching a probe in “market manipulation” by Reddit raiders and Robinhood earlier today, the SEC said social media accounts may have been used in a coordinated attempt to “artificially influence” the share price of the company, which does not have a working phone line or website and has not filed quarterly financial results since 2017.

Lack of actual business notwithstanding, trading of the company’s stock exploded in December and has continued at elevated levels. On January 28, the day a retail-fuelled rally sent the stock of retailer GameStop to a record high, more than 3bn shares of SpectraScience changed hands. 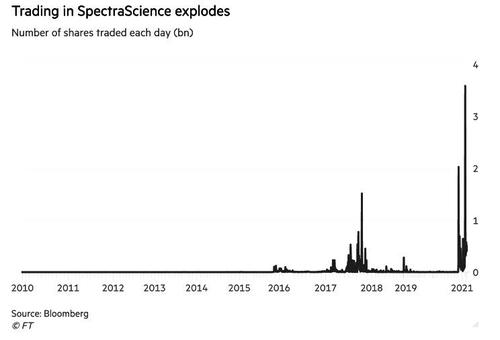 The coordinated flood of bids pushed SSEC shares briefly above half a penny, its highest level in more than four years. The company’s stock last traded above a penny in 2015. 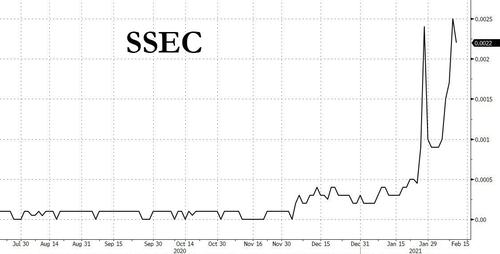 “The commission is of the opinion that the public interest and the protection of investors require a suspension of trading in the securities,” Vanessa Countryman, the secretary of the SEC, wrote in the commission’s order, in which she said that the suspension in SpectraScience shares would last to February 25, although expect another immediate re-suspension if the stock does not drop.

While much of the original coordination took place on reddit, some activity appears to have been orchestrated via Twitter, where the FT notes that clusters of day trader accounts tagging the SCIE ticker “spoke in bombastic terms about the stock and their recent investments as they discussed so-called penny plays.”

One account under the name Alexander Delarge, which had amassed around 50,000 followers, tweeted a post encouraging users in late January to buy the stock, adding that it was likely to go to $1.

“Ill be buying a million shares at a Dollar showing my buy order to keep it going! As we all should!” the user wrote.

Among later tweets by the same account, one showed a screenshot of a portfolio of 5.5m SpectraScience shares saying it had gained 50 per cent in one day, adding: “Let the haters watch when this blasts off!”

Another popular day trader “Canadian Jennifer”, also joined the chorus in early February saying “Yes I bought more! I’m not telling you to buy it. I’m just posting what I SEE and that I’m holding. When my instincts kick in I listen.”

$SCIE I’m not telling you to buy, hold, or even stop bashing it, myself or Delarge. I will say that the intent was to choose a company that helps with cancer. There was never ill intent here. This posted Jan 27th and it includes $SCIE medical equipment https://t.co/krKPqoz767

And while the SEC is now scrambling to put the genie in the bottle, the reality is that in a world where infinite Fed liquidity has terminally broken any link between stock prices and underlying facts, news or cash flows, such ramps are going to become an increasingly more frequent occurrence. And sadly since no regulator can admit that we now live in the biggest asset bubble ever, they will continue going after the symptoms – speculative daytraders organizing bull raids which by the way have been around ever since the South Sea Bubble – instead of actually focusing on the underlying cause.

Incidentally, if anyone is still long SRMX whose explosive performance we profiled earlier and which was outperformed SCIE almost threefold, it is only a matter of time before the SEC suspends trading in that company too. 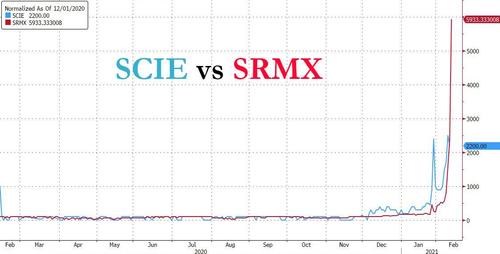