What Collapsed The Middle Class?

What Collapsed The Middle Class?

The middle class has already collapsed, but thanks to debt and bubbles, this reality has been temporarily cloaked. 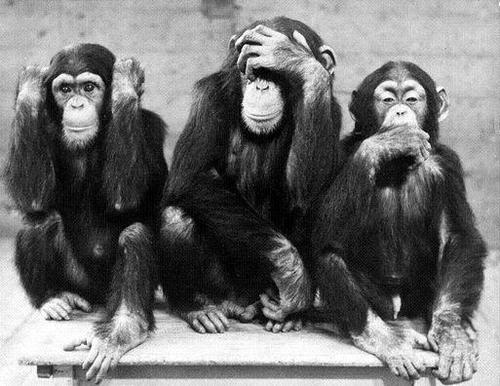 What collapsed the middle class? In many ways the answer echoes an Agatha Christie mystery: rather than there being one guilty party, a number of suspects participated in the collapse of the middle class.

Can we consolidate these dynamics into a few core causal factors? I’ve made the case in the past few posts that yes, we can: many of these causes are part of a single dynamic, the decapitalization of the middle class and the decay of the ladder of social mobility which enabled tens of millions of workers to transform their wages into productive capital via saving and investment in their own human capital, their own enterprises and assets that earn income.

This dynamic incentivizes debt, speculation and consumption rather than producing, savings and investments in human and productive capital. The source of this incentive structure is the maximization of corporate profits earned by banks loaning money to the middle class and by selling the middle class on superfluous consumption being the signifier of “success” rather than production being the signifier of “success”.

In reality, what counts is agency (control of one’s life, having a voice in governance) and ownership of productive capital. Becoming a debt-serf to buy more stuff and grab a few chips in the speculative casino sacrifices both agency and the acquisition of productive capital. But this sacrifice is oh-so profitable to the financier purveyors of debt and speculative gambles in the casino.

The third dynamic is globalization, and specifically the tyranny of global markets. Global banks and corporations are ideally placed to profit from the arbitrage of labor, environmental regulations, currencies, corruption (dear in some places, cheap in others) and the price of debt and risk.

Wage earners have no such leverage. In effect, all the risks of competition are eliminated for corporate monopolies and cartels while the risks are transferred to workers who face a global race to the bottom in wages, opportunity and income security.

The fourth dynamic is speculative bubbles put many assets out of reach of the bottom 90% who have only their wages and savings. The winners in speculative bubbles are those fortunate enough to have bought homes, bonds, rental properties, land, etc. decades ago when a house could be had for three times median income and bonds paid solid, above-inflation returns.

The bottom 90% attempting to find productive assets at affordable prices now are out of luck. Consider a 900 square foot home built in 1916 in the desirable San Francisco Bay Area community of Albany, CA. The house sold for $135,000 in 1996, 3.8 times the national median household income.

Then Housing Bubble #1 boosted the value to $542,000 in 2004, 12.2 times the national median household income. Housing Bubble #2 has pushed the value to slightly over $1 million, 14.5 times the national median household income. Only those inheriting wealth (or who chose wealthy parents), those earning over $250,000 annually or speculators who just scored big gains in bitcoin or GameStop could afford this very small, modest house.

That’s what speculative bubbles do to the middle class: they leave them behind forever. Those who bought 25 years ago entered the top 10% in wealth due to the bubblicious increase in the value of their home. A few winners in the casino who sold at the top might have edged into the top 10%, but the vast majority of gamblers in the casino cannot compete with the insiders, manipulators and pros, so they lose ground. This is why the bottom 90% collect an insignificant 3% of all income from capital.

These four primary dynamics manifest in the following ways. Each one helps generate a two-tier Neofeudal Economy of a Financial Aristocracy and its top 9.9% technocrat class who own virtually all the productive capital and the bottom 90%, a disenfranchized ALICE (assets limited, income constrained, employed) workforce.

1. The shifting of pension and healthcare costs and risks from the state and employers to employees. (see chart below) 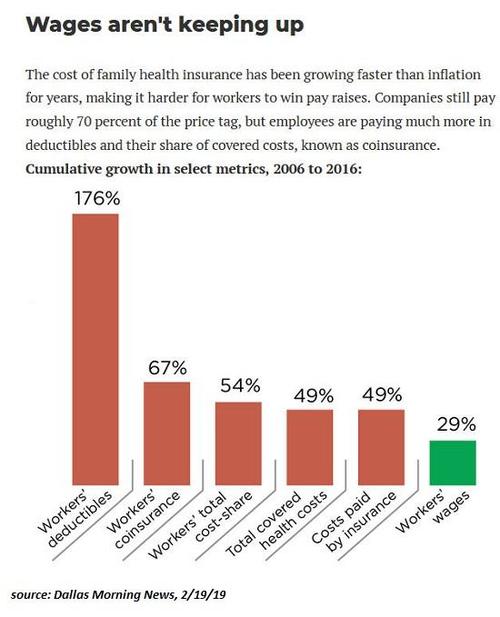 2. The decline of safe, secure high-yielding investments as central banks have driven savers into risky, crash-prone speculative assets such as stocks and junk bonds.

3. The decline of scarcity value in college diplomas that were once the ticket to middle class security. How Many Slots Are Open in the Upper Middle Class? Not As Many As You Might Think (March 30, 2015).

4. The inexorable rise in big-ticket costs: higher education, healthcare and housing. Even as wages stagnate, these costs continue rising, claiming an ever-larger share of household incomes, leaving less to save/invest.

5. The transition from a stable economy with predictable returns to a financialized boom-and-bust economy that wipes out middle class wealth in the inevitable busts but does not rebuild it in the booms.

6. The regulatory and administrative barriers to self-employment, forcing most of the workforce into wage-slavery and/or dependence on the state. Endangered Species: The Self-Employed Middle Class (May 2015).

7. The rising exposure of the U.S. workforce to highly educated, lower-cost competing workforces in a globalized economy.

8. The decline of labor’s share of the U.S. economy: the slice of the pie distributed to earned income has been declining for decades. 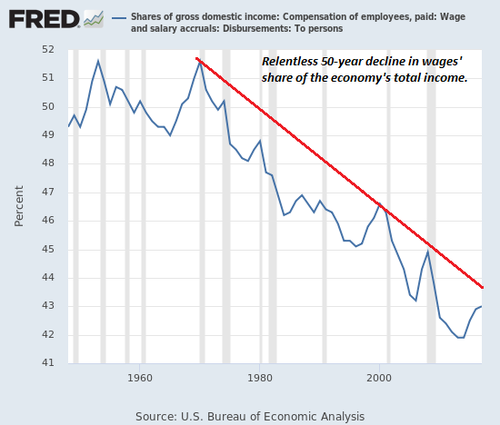 9. The share of the earned-income slice going to the top 5% is rising. 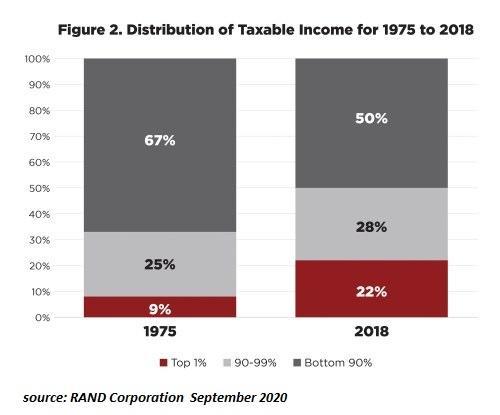 10. The wealth of the middle class is tied up in the family home, a non-income producing asset prone to the wild swings of housing bubbles and busts. Stagnation Nation: Middle Class Wealth Is Locked Up in Housing and Retirement Funds (October 25, 2017).

The middle class has already collapsed, but thanks to debt and bubbles, this reality has been temporarily cloaked. All bubbles pop and all excessive debt ends in default. When these inevitably occur, the reality can no longer be hidden.

If you found value in this content, please join me in seeking solutions by becoming a $1/month patron of my work via patreon.com.

Will You Be Richer or Poorer?: Profit, Power, and AI in a Traumatized World (Kindle $5, print $10, audiobook) Read the first section for free (PDF).

The Adventures of the Consulting Philosopher: The Disappearance of Drake $1.29 (Kindle), $8.95 (print); read the first chapters for free (PDF)