Over the last several years, a movement has emerged promoting salary transparency throughout various industries, which, according to Glassdoor.com “helps expose pay gaps between otherwise similar workers, encouraging underpaid employees to negotiate or move to better-fitting jobs, improving overall efficiency in labor markets.”

“In recent years, there has been a gradual shift away from traditional workplace secrecy and toward more transparent salary policies,” according to a 2015 report by Glassdoor chief economist, Andrew Chamberlain.

According to a January survey of 1,500 workers conducted by career resource site Zippia, it may simply be suffering from a lack of participation – particularly among older workers. In fact, 50% of workers overall are unwilling to share their salary information, while 30% of workers say they would be uncomfortable sharing their salaries, period.

Workers 25-34 years old are most comfortable sharing salary information- a whopping 58% are willing to discuss salary. Who is less eager to share? Older workers. In particular, those over 45.

As this age group ages and advances in their careers, this open attitude could increase salary transparency. However, it is possible younger workers will shed their desire to freely share salary information as they are promoted. –Zippia 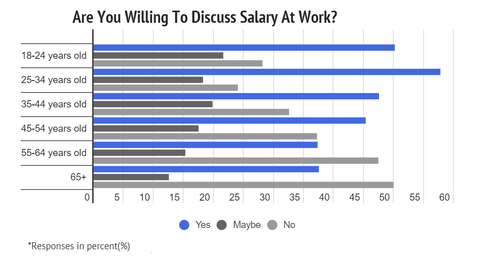 Here’s a US map with salary transparency by state: 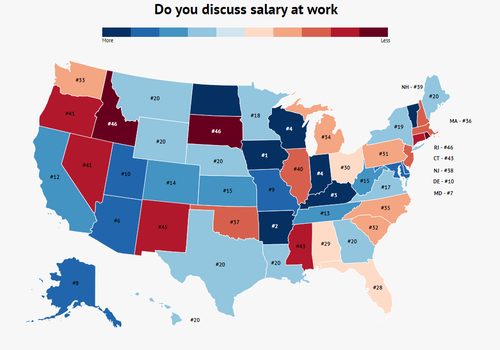 So, does salary transparency lead to higher pay? That’s unclear – but workers who are expecting a ‘large raise’ were most likely to disclose their salary than those not expecting a large raise. 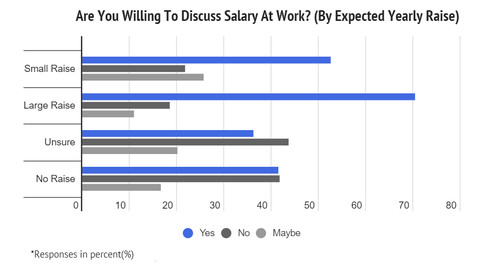 Meanwhile, Indeed.com found in January that most workers and job seekers want to know where they stand. They also found that 66% of those surveyed have never shared their salaries on a job website, while only half have shared their pay with friends, and 60% say they’ve never asked a co-worker what they make.

21% of those surveyed say it feels taboo to discuss pay, with around the same number of people saying that they don’t want to create drama at work, according to Indeed. 14% worry about getting in trouble with management for asking or telling.