Authored by Michael Tracey via Medium.com,

Congress is increasingly not a place where the average member partakes in what’s generally understood as legislative activity, but rather engages in a variety of elaborate self-promotional exercises. The diminishment in the power of average House Members (as opposed to Party leaders who run their respective caucuses like fiefdoms) has been amply documented. One consequence of this trend is that “comms” has become far more of an all-consuming focus for a certain type of Member, particularly those who are most adept at social media. 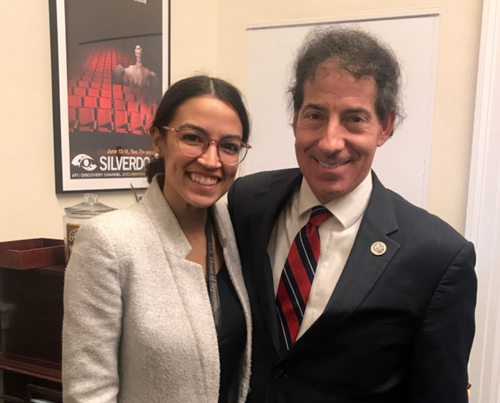 One “comms” strategy that appears highly effective at the moment in generating outsized public attention is extreme, heavily-personalized emotional exuberance. With the “trauma” of the MAGA goofball mob intrusion still apparently dominating their psyches, members of Congress have taken it as a solemn duty to claim “space” for the “sharing” of their “lived experience” relating to this event.

Alexandria Ocasio-Cortez is a true pioneer in importing the rhetoric of therapeutic trauma jargon, already the lingua franca of an ascendant activism-minded cultural and media cohort, into the mainstream of the Democratic Party. At her direction, it will only become more ubiquitous. And given that such rhetoric deliberately inverts the normal epistemology of contested political claims — it’s deemed incumbent on the listener not to critically evaluate the veracity of such claims, but instead uncritically believe them — the new mode of public argument she’s popularizing is likely to prove highly effective, as it inherently forecloses the prospect of any argument at all. Per this framework, arguments are replaced with subjective assertions that must be presumptively accepted, lest one be guilty of “minimizing” or “belittling” the elected official’s experiences and thus compounding their trauma.

Jamie Raskin, the Democrats’ lead impeachment manager, took a page from this playbook during the opening presentation of Donald Trump’s trial Monday, breaking down in tears at one point as he wove a narrative about the terror of January 6 with his own personal turmoil. Raskin’s son died on December 31, and the pain he felt from that experience was integrated seamlessly with the pain that he posited all members of Congress must have felt during the goofball riot.

Of course, everyone who’s not a psychopath would sympathize with Raskin for having lost a son to suicide. But to invoke this tragedy in the context of an impeachment trial has an obvious political intent. The intent was to heighten the emotional resonance of the prosecution’s case for convicting Trump, as according to Raskin, he feared that his daughter might also face untimely death because she happened to be in the Capitol with him on January 6. The more intense the “pain” that can be conveyed to the juror-senators, the more likely they are to vote to convict Trump — or so the calculation seemingly goes.

Fellow impeachment manager David Cicilline charged that every single member of Congress nearly avoided being slaughtered in a mass execution-style attack that day — “They could have killed all of us,” he said — although no real evidence has ever been presented to substantiate this dramatic theory, which seems only to be professed by partisan Democrats. A number of basic facts stemming from the Capitol intrusion which could provide clarity are still mysteriously absent from the public record, such as whether any of the rioters brandished or discharged firearms. You’d think this would be helpful information to know before proclaiming, as Cicilline did, that what occurred was an “armed insurrection.” It would be a very curious “armed insurrection” for no firearms to have been deployed over the course of the “insurrection.”

Raskin, Cicilline, and AOC are all politicians fulfilling a political purpose, but the style of rhetoric they increasingly make use of is designed to obscure that role. They are to be regarded principally as victims, as opposed to public officials who wield state power — and as such their political aims must be supported because if you don’t, you are maliciously exacerbating their victimization.

Bill Clinton once famously exhorted, “I feel your pain.” The rising breed of contemporary politicians appear more inclined to “share” their own “pain,” and then exhort us to feel it.