According to the latest 10-year economic outlook (for the period 2021-2031) published today by the CBO, total US debt is expected to exceed 100% of GDP this year, which is hardly news:

Here, the CBO is being just a little tongue in cheek because by “rise further” the CBO means that 2031, debt would equal 107% of GDP, the highest in the nation’s history. And then it really takes off. 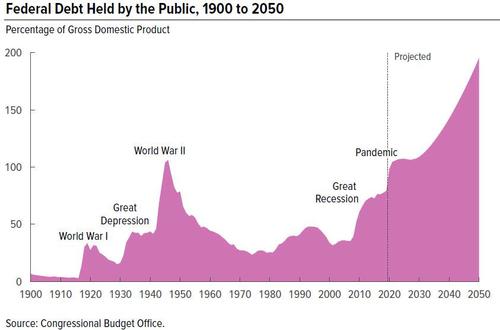 What is new is that unlike its last forecast, the CBO now predicts that the annual federal deficit is set to decline from the year before, when the deficit surged due to the historic emergency measures. Specifically, in 2021 the annual deficit is expected to decline by nearly $900 billion compared to 2020, when the deficit breached a gargantuan $3.1 trillion due to the trillions in new spending approved by Congress in response to the pandemic.

CBO projects a federal budget deficit of $2.3 trillion in 2021, nearly $900 billion less than the shortfall recorded in 2020. At 10.3 percent of gross domestic product (GDP), the deficit in 2021 would be the second largest since 1945, exceeded only by the 14.9 percent shortfall recorded last year. Those deficits, which were already projected to be large by historical standards before the onset of the 2020–2021 coronavirus pandemic, have widened significantly as a result of the economic disruption caused by the pandemic and the enactment of legislation in response. 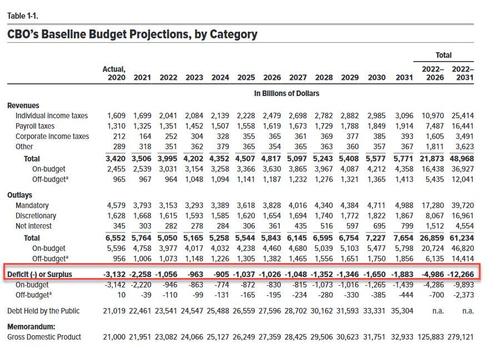 There is a catch, however: the CBO does not take into account President Biden’s proposed $1.9 trillion stimulus package:

There is another catch: under current laws, the CBO is required to construct its base-line under the assumption that current laws governing revenues and spending will generally stay the same and that discretionary appropriations in future years will match current funding, with adjustments for inflation.  But, in consultation with the House and Senate Committees on the Budget, “CBO deviated from those standard procedures when constructing its current base-line for discretionary spending.”

Because of the unusual size and nature of the emergency funding provided in response to the 2020–2021 coronavirus pandemic, the agency did not extrapolate the $184 billion in discretionary budget authority that has been provided for such purposes so far in 2021. Emergency funding provided for purposes unrelated to the pandemic was projected to continue in the future with increases for inflation each year after 2021.

In other words, not only is the CBO not factoring in the Biden stimulus, it is also assuming that Congress will spend less than it has been authorized to spend. Which, of course, is idiotic.

The CBO’s debt projections are sure to invigorate the ongoing debate over Biden’s stimulus proposal, as Republicans try to argue that the U.S. faces unsustainable debt burdens after spending more than $4 trillion in response to the virus.

But stimulus or not – and there will be a stimulus, only question is how big – the CBO concedes that after 2031 all bets are off: “By the end of the period, both primary deficits (which exclude net outlays for interest) and interest outlays are rising.“

Combined with the exponential surge in debt starting in one decade, that’s better known as the endgame.