The recent boom and bust of GameStop shares is a wake-up call to policymakers that world markets and economies are precariously positioned, and pose serious risks to political stability.

The US is patient zero for this sickness and as the US goes, so too will much of the world. GameStop illustrates clearly that capital markets are driven by flows and investor positioning, rather than by the underlying fundamentals of businesses.

The primary causes of this market dysfunction are the prevalence of passive investing and leverage enabled by low-interest rates. The combination has resulted in grotesque distortions of capital allocation while further bifurcating society into haves and have-nots.

The increasingly obvious fact is we do not know whether the government will be able to perpetually bail out markets. With interest rates already hovering around 0 per cent, the traditional levers of monetary policy may not be able to rescue markets and prevent another depression.

The effort to squeeze short-sellers took GameStop’s share price well beyond any rational fundamental valuation. It soared by 23 times within 11 trading days as those who had bet the price would fall were forced to buy shares to cover their obligations.

One factor that made the GameStop squeeze so profound was passive ownership. About one-quarter of the available shares were owned by passive investors. These funds run on autopilot. As new money comes in, it is allocated to keep a constant balance among a specific combination of individual stocks or other assets. As GameStop’s price rose to ridiculous heights, those passive funds were almost certainly buying to maintain their balance.

These same phenomena are a big part of the Tesla stock story. Ever-rising share prices that have no basis in fundamentals have birthed yet another meme, “Stonks!”, which is feeding frenzied retail speculation.

The distortion of prices caused by the growth of passive has only recently been fully understood, thanks to the work by Michael Green of Logica Funds and a growing number of academics.

Green estimates that when an incremental dollar is put to work with an active manager, it has an average effect on aggregate market capitalisation of $2.50. The multiplier occurs because the number of shares available is smaller than the total number of shares outstanding, and a buyer must often pay a premium to induce a shareholder to sell. However, Green estimates that when a passive fund receives an additional dollar, the automatic decision to maintain balance by buying in proportion to market capitalisation results in an increase in market cap of more than $17!

Passive funds have a much greater impact on prices because active investors can be patient in deploying their capital and are sensitive to the prices they pay. Passive funds have little discretion whether and at what price to buy — they must buy if they have inflows. Perversely, passive funds’ demand for a stock generally grows as the price increases because the weighting of the stock in the indices they track increases. So long as such funds have inflows, they do not sell.

Leverage linked to low interest rates turbocharges these unhealthy dynamics. Balanced funds are forced to buy stocks because their bonds have risen in value. Pensions and endowments are forced into equities to replace lost yield. Stonks’ increased values are used for collateral for loans to buy more stonks. Cheap money leading to excessive speculation contributed to the 1990s dotcom bubble, the 2000s housing bubble, and now the stonk bubble.

The real risk to markets is that passive flows go negative (if widespread lay-offs lead workers and employers to cut their 401K contributions). If that were to happen, passive fund selling would quickly overwhelm the market. Such a crash could resemble 1929-1932 in magnitude but at 2021 speed. 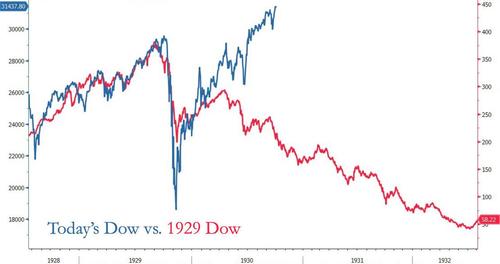 We should not ignore the societal impacts of bubbles. Their most insidious result is the transfer of wealth from the many to the few. Societies face dark years while they try to navigate the disenfranchisement generated by inequality.

The way to fix the markets’ contributions to instability is to address the distortions arising from passive investing’s growth, including looking at funds through the lens of antitrust issues and as systemically important financial institutions.

We must find a way to deleverage our economies and markets. We live in a time when governments seem to lack the will and competence to do hard things; but the results of delay are not pretty. Let’s choose wisely.