Authored by Dave DeCamp via AntiWar.com,

On Wednesday, President Biden announced a new Pentagon task force that will be reviewing the US military’s policy towards China, another sign that the new administration is prioritizing confronting Beijing.

Pentagon officials said the task force is a “sprint effort” that will examine things like US troop presence in the region, intelligence, and the role of US allies and partners in countering China. Leading the task force is Ely Ratner, a China hawk who Biden appointed as a special advisor to Secretary of Defense Lloyd Austin.

Before his new position at the Pentagon, Rather worked at the interventionist Center for a New American Security (CNAS) think tank. Despite the Trump administration’s hardline policies towards Beijing, Ratner didn’t believe Trump was tough enough. In September 2020, he co-authored an op-ed titled “Trump Has Been Weak on China, and Americans Have Paid the Price”.

From his post at CNAS, Ratner led a congressionally mandated study on China that was released in January 2020. The report outlined various ways the US could compete with Beijing in Asia, including military deterrence or a “combat-credible posture in the Indo-Pacific,” as the study put it.

The study says the US should help its allies in the region build up their militaries to counter China, with a focus on India. “The United States should pay particular attention to supporting India’s efforts to pose military dilemmas for China,” the report reads.

Both Secretary Austin and Kathleen Hicks, his deputy secretary of defense, identified China as the “pacing threat” to the US military. With Ratner leading the review and China the Pentagon’s priority, the likely result of the task force will be an expanded US military presence in Asia. 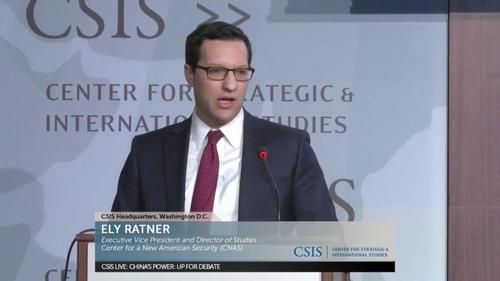 The announcement of the task force comes as the new administration is stepping up provocations in the South China Sea. On Tuesday, two US aircraft carriers entered the disputed waters and held rare dual-carrier drills.