Authored by Alice Salles via The Mises Institute,

US residents whose family members died with or of covid will be eligible to receive $7,000 for funeral and related expenses, New York senator Chuck Schumer (D) and Representative Alexandria Ocasio-Cortez (D) announced. 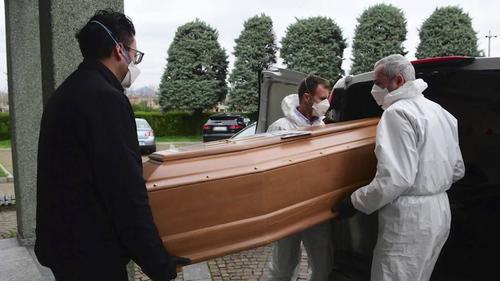 During a briefing in Queens on Monday, February 8, the duo announced that $267 million of the federally funded funeral benefits would go to low-income families in New York alone. The package, Schumer added, is part of a $2 billion disaster funds program run by the Federal Emergency Management Agency (FEMA) that will provide benefits to families nationwide.

In her speech, Ocasio-Cortez explained that families “are having to pay for the storage of the bodies of their own loved ones” in addition to covering the funeral and burial expenses.

“This is wrong,” she added.

The announcement was received warmly on social media, so it wasn’t a surprise to see few people questioning the duo’s intentions.

But if the goal is to help those impacted by the pandemic, why did neither Democrat bring up plans to provide aid to the families who lost loved ones to various state governments’ responses to the coronavirus?

Following the first reports of infections, most states had stay-at-home orders in place as early as March 2020. While some governors started lifting some of the restrictions in June, the majority kept them in place, tightening restrictions once again by Thanksgiving.

By now, we already know that the forced business shutdowns created a pattern of destruction that will be hard to remedy. According to Yelp’s data, 97,966, or 60 percent, of the 163,735 businesses listed on the platform that closed between March and August won’t reopen. To many of these small business owners and their employees, unexpected closures meant poverty, depression, and lack of access to healthcare, all problems that also lead to deaths.

According to some estimates, deaths associated with factors other than coronavirus make up at least one-third of all excess deaths during the pandemic.

Deaths of despair, which include suicide and drug abuse, have been on the rise everywhere in the country since the beginning of the lockdowns, as well as deaths caused by delayed or interrupted medical treatment. The rate of domestic abuse is also growing, putting a greater number of lives at danger. One would think congressmen would try to use the lockdown-related data to push yet another benefits package. However, they all seem to play down the deaths and suffering caused by governments’ shutdown orders.

Before pushing for funeral expense reimbursements for families whose loved ones had covid, Ocasio-Cortez tried to play down the Democrats’ support for lockdowns by blaming Republicans who don’t wear masks for “forcing” states to shut down.

“Here’s what’s ironic to me: all these Republicans, all these people who were anti-shutdown, were the same people who weren’t wearing masks, who forced us to shut down in the first place,” she said in an Instagram Live video.

Despite her claims, two of the states hardest hit by the pandemic, California and New York, were also two of the first to enact mask mandates. But on Monday, February 8, the New York congresswoman had no words of sympathy for the families whose loved ones died due to the tyrannical mandates enacted by governors such as New York’s Andrew Cuomo, who now believes that lockdowns have gone too far.

“We simply cannot stay closed until the vaccine hits critical mass. The cost is too high,” he tweeted following the inauguration of President Joe Biden.

If Schumer and Ocasio-Cortez are indeed working to help the low-income families who lost loved ones in 2020, they are letting down a great number of Americans (and immigrants).