Is This Why Tesla Just Plunged?

Is This Why Tesla Just Plunged?

Having trod water for the last month, after such an explosive run leading up to and beyond its inclusion in the S&P 500, TSLA stock took a tumble today (and dragged the market with it)… 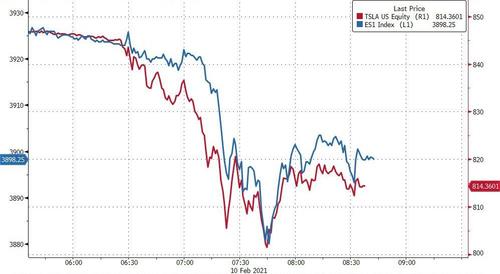 Various catalysts were promoted, including a DogeCoin tweet, but we suspect the real driver of today’s decline is an utterly stunning position that someone took in massively out-of-the-money put options on the automaker.

The deep out-of-the-money options on TSLA were the most active among all U.S.-listed contracts as one investor appeared to buy March $20 puts. 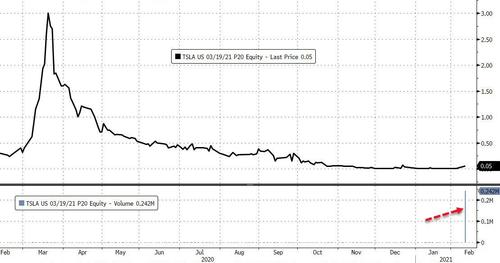 For some context, here is today’s put volume across all strikes…

Spot the odd one out?

The last twelve months have seen a lot of talk about “gamma squeezes”.

As a reminder, this ‘bullish’ positioning relies on the hedging actions of options dealers…

The banks and brokers who are the largest sellers of options must hedge their trades.

Most dynamically hedge, meaning they frequently adjust the hedge amount according to the Delta of the option.

If the Delta is .35, then they buy 35 shares for every option contract they are short. If the Delta then rises to .40, they buy five more shares.

Conversely, they sell when the Delta falls. If the Whale buys enough calls, they can trigger a Gamma squeeze. The option purchases force the dealers to buy the stock, which pushes the share price higher.

As this happens, the dealers’ buying activity increases the Delta at a non-linear rate (gamma).

In circular fashion dealers then must buy more of the stock, and on and on.

The exact same pattern can be achieved to the downside by buying massively OTM puts and forcing dealers to delta hedge by ‘selling’ more stock and potentially enabling a downside vicious circle.

The question is – who is doing this?

We can’t imagine it would benefit the Softbank whales to drive down the greatest momo stock in tech fantasy land?