Dan Loeb: “We Are Looking To Identify A Rapid Rise In Rates” – Full Q4 Letter

Dan Loeb: “We Are Looking To Identify A Rapid Rise In Rates” – Full Q4 Letter

After a disappointing start to the year, Third Point’s Dan Loeb had a solid fish, returning 15.9% in Q4 and bringing his YTD performance to 21.5%, once again outperforming the S&P’s total return (18.4%).  And unlike many of his peers who saw harrowing redemptions in 2020, Loeb had no such troubles, closing the year with $15.5 billion in AUM. 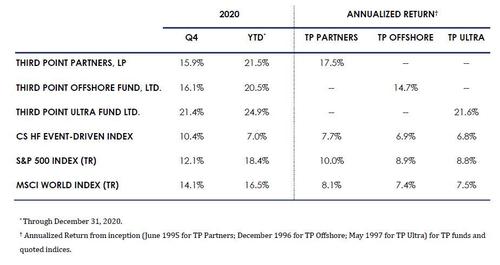 Loeb writes that his biggest winner in the Fourth Quarter was Upstart Holdings, while “constructive investments in The Walt Disney Company and Prudential plc were top performers, along with Pacific Gas & Electric Company.” Meanwhile, detractors were “Alibaba Group Holding, three equity shorts, and a private credit position negatively impacted by COVID-19.”

As usual, before giving an update on his most prominent equity positions, including Intel (“Intel’s human, financial, and intellectual property resources are unmatched in the semiconductor industry. The ability to leverage those resources in order to better capture the full unbounded growth of this market opportunity set makes us excited to be long-term shareholders“), Prudential, Upstart Holdings, and his credit positions, Loeb gives a 30,000 foot take on the markets and this one is especially interesting. Read on:

The recent short squeeze in certain securities is nothing new. Indeed, as Jesse Livermore said in Reminiscences of a Stock Operator, (quoting Ecclesiastes), in investing, “there is nothing new under the sun.” As targeted securities have started to come back to earth, wiping out fortunes on the way down as they did on the way up, we can see that this was a bubble no different than other manias over time, going back to the Dutch Tulip Bulb Mania in the 17th century. What is different today, however, is the rapidity of the rise and collapse of bubbles, fueled by retail trading platforms and social media. Large short interests were also an accelerant in this conflagration. We managed to sidestep substantial losses for two reasons. The first is that we have always felt more comfortable with higher net and lower gross exposure. It is tempting to think that lower nets imply lower risk, but recent events are a stark reminder that leverage, in all its forms, is a double-edged sword. In addition, after a few previous painful experiences of our own taking positions against companies with large short interests, we had a preview of what can happen and cut our losses. Since then, we have mostly avoided taking short stakes in companies with modest liquidity and large short interests.

On the economic front, the surprising resilience of the US consumer has informed our optimism since Q3 2020 about a rapid economic recovery following widespread vaccine rollouts. Employment is still down 7% from pre-pandemic levels but jobs in sectors disproportionately impacted by COVID-19 such as retail, restaurants, and entertainment should return quickly as vaccinations ramp and consumers eagerly return to normal life. Both monetary and fiscal policy are also supportive tailwinds. We expect substantial additional stimulus in Q1 or early Q2 and the Fed remains firmly on hold, keeping nominal rates fairly low by historical standards.

To summarize: Loeb was spared the short squeeze, neither profiting from it, nor losing money to it, and he remains optimistic about the economic and markets. That’s the good news. The bad news is that his economic optimism (and buying) could quickly turn to revulsion (and selling) if inflation rises to high:

Against this favorable backdrop, inflation remains a chief concern. Consensus is strong that it will remain subdued given the high slack in the labor market but, if this is incorrect, the Fed will hike rates more quickly, shocking markets and challenging the recovery. We are focused on interest rates, which will help define how and what type of assets “work” at the margin going forward. The interaction between US nominal yield, the US real rate, and the effective difference between the two (e.g. inflation expectations) is our focus. Rising rates are not bad for equities but can drive sector and factor rotation. We are looking to identify a rapid rise in rates or a de-coupling of real rates and inflation (where the former rises and the latter falls). This scenario would be bad for risk assets broadly and impact long duration assets more harshly as the discount rate inflects higher.

Nothing new here as Loeb merely repeats what we have said on countless occasions, that ultimately what will hammer this market is not war, or some disaster but the the de-anochring of price expectations and soaring inflation. That’s when Powell will no choice but to tighten conditions.

Next, Loeb lays out the areas where he see the “most compelling opportunities in markets” which include:

As the SPAC market boomed last year, disintermediating the traditional IPO channel, we used our balance sheet, structuring capabilities, and domain expertise to partner with certain companies seeking to go public via a SPAC. We try to involve ourselves early in the process, become engaged, and partner with great operators with track records of outsized returns. We have anchored and led several PIPEs in the last two quarters and have several other active deals in our pipeline.

Our ability to structure and syndicate ABS based on trusted counterparty relationships, domain expertise, and balance sheet strength provides us with another uncorrelated source of alpha. Positive trends should drive further gains in ABS markets and we see structured credit as a compelling post-pandemic opportunity set.

Going into COVID, America’s cash flow output (corporates and consumers) stood at a 70-year high and COVID catalyzed a further surge to an outsized 17% of GDP (~$3.5 trillion). A substantial portion of the accumulated $2 trillion of excess savings among consumers should be unleashed as the economy reopens, favoring services sectors such as restaurants, travel, and leisure. Likewise, we think the M&A market in 2021 will be robust, driven by high corporate cash levels, readily available financing at attractive rates, nearly a trillion dollars of dry powder in private equity funds, and boardroom confidence bolstered by a strong equity market.

The rest of the letter is basically Loeb reiterating the logic behind the bull cases of his top long. You can read that below.