The Chicago Teachers Union has finally come to an arrangement with the nation’s third-largest school district to resume in-person classes for students up to the eighth grade, ending a months-long impasse between public officials and teachers who are petrified of catching COVID-19. 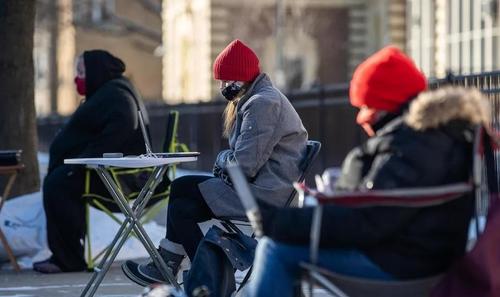 The union vote – for which 13,681 out of roughly 25,000 members voted ‘yes’ and 6,585 voted ‘no’ – has diffused an impending lockout or strike after negotiations intensified in recent weeks – with teachers demanding a safer environment and more vaccinations, along with metrics to guide school closures if COVID-19 infections spike, according to the Associated Press.

The union said 13,681 members voted to approve the agreement and 6,585 voted against it. In a statement, the union described the agreement as the “absolute limit to which CPS was willing to go at the bargaining table to guarantee a minimum number of guardrails for any semblance of safety in schools.”

Union President Jesse Sharkey also criticized the agreement in an email to members that was released by the union. –Associated Press

“This plan is not what any of us deserve. Not us. Not our students. Not their families,” read the email from Sharkey, adding. “The fact that CPS could not delay reopening a few short weeks to ramp up vaccinations and preparations in schools is a disgrace.”

On Thursday, the first wave of students in pre-K and special education are expected to return to classrooms, while K-8 will return in the coming weeks for ‘limited classroom instruction.’ No plans have been made for high school students to return, whose learning will continue online.

Talks over resuming classroom instruction since going fully remote last March have been heated amid debates worldwide over reopening schools. Chicago Mayor Lori Lightfoot had warned teachers that they would be locked out of district systems if they didn’t report for duty. The union countered by threatening to strike.

Chicago Public Schools officials have insisted it is safe to have classes in person with protocols in place, like wearing face coverings and a $100 million safety plan that includes thousands of classroom air filters. District officials and Lightfoot has said remote instruction is leaving many behind, particularly Black and Latino students who make up the majority of the roughly 340,000-student district. –Associated Press

When special education and pre-K instruction briefly resumed in January, attendance was roughly 19% of those eligible.